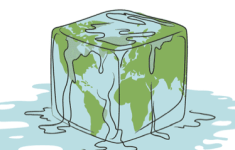 Two weeks ago, the U.S. Chamber of Commerce was the target of an elaborate hoax by the Yes Men leading some major media outlets to believe that it had reversed its opposition to the Kerry-Boxer climate bill pending approval in the Senate. Now it seems the chamber has officially expressed support for legislation that would cut carbon emissions — but still in confusingly vague terms.

Apparently, the organization sent a letter to Senators Barbara Boxer and James Inhofe (full text), the party leaders in the Senate’s Environment and Public Works Committee where the bill is being amended, supporting climate change legislation, while also requesting that a new, more balanced bill be drafted. Whether its support is genuine, or it’s just reaching for the most PR-savvy stall tactic remains to be seen. Although, considering how negative and obstinate it has been on the Kerry-Boxer bill recently (despite the loss of several of its most prominent members including PG&E and Apple), it’s probably the latter.

Its strategy is pretty brazen. It obviously wants to change its image as the newest ignorant villain in the global warming debate, without actually encouraging action. Praising a recent New York Times editorial written by Senators John Kerry and Lindsey Graham on climate change, the chamber’s letter reads:

The Chamber welcomes the call for a new conversation on how to address the issue and believes the editorial can serve as a solid, workable, common sense foundation on which to craft a bill. Many other important details are needed, but the Chamber agrees with the objectives outlined in that editorial.

It even goes as far as to say that “The Chamber will continue to oppose bad policies that resemble the failed climate proposals of the past, such as bills that jeopardize American jobs, create trade inequalities … and further hamper the permitting process for clean energy.”

This argument touches on all the hotspots that could turn the public against the bill, tying the hands of their representatives: the potential for it to damage an already struggling economy, spread unemployment and hurt the U.S.’s position in the global community. In doing so, it implies that the current bill on the table, one that would establish a carbon trading system and set renewable energy targets, has all the trappings of these previous “bad policies.”

It will be interesting to see if this half-hearted effort is enough to soothe the concerns of chamber members who favor the current climate bill. Will companies see through this new position? Will there be more defections? We here at VentureBeat have been keeping a close eye on Silicon Valley members like Cisco Systems and IBM to see if they will follow the eco-conscious trend kicked off by Apple, but there’s no evidence of them taking a stand yet.

Regardless, the Chamber will come up against some heavy pressure from the Obama administration which is all of a sudden working hard to push the existing climate bill through Congress, or at least to get it to a stage that will give the U.S. something constructive to say at the upcoming climate talks in Copenhagen in December.