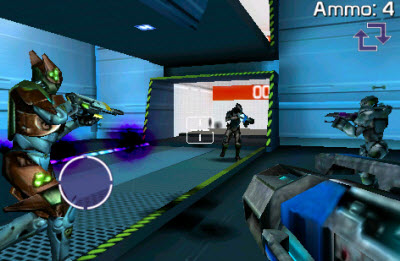 With a new game, a new business model, and a new developer platform, iPhone game publisher Ngmoco has been able to land itself on the top of the AppStore charts.

Ngmoco’s Eliminate Pro shooting game moved to the No. 1 spot on Apple’s app download store after its launch on Monday. The new game uses a new business model made possible by Apple’s recent change in policy allowing purchases of virtual goods to be made from inside free games.

Previously, Apple only allowed such purchases to be made inside paid games. But that didn’t enable the “free to play” business model that has worked so well on Facebook and other social networks. In these games, players start playing the games for free. Then they buy a virtual good such as a weapon for a small price once they need it. 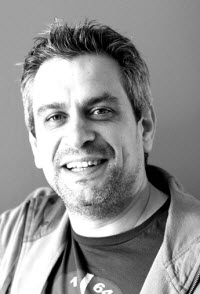 In Eliminate Pro, players can challenge each other in multiplayer shooting matches over Wi-Fi or the 3G phone network. The player winds up paying for time, much like putting quarters into arcade machines in the past. When you start playing the game, you can join multiplayer combat games. Each time you play, you use a portion of a “power cell.” At some point, to continue playing, you have to purchase more power cells. If you want to play for free, you have to wait a certain time for the power cell to recharge. If you want to skip that wait, you have to shell out some money. The key is that the game can generate recurring revenue.

“This business model will be transformative for our company,” said Neil Young, chief executive of San Francisco-based Ngmoco, in an interview. “We are now operating a game as an ongoing service.”

The usage-based monetization could prove to be more lucrative than requiring players to pay to download a game. On the AppStore, it’s hard for games to break into the top 100 ranks, since there are more than 100,000 apps available. And those that do make it to No. 1 rarely stay there for more than a couple of weeks. Hence, the revenues associated with even a No. 1 hit on the iPhone don’t add up to much. But if a game is popular enough and players are willing to pay for usage time, then it can generate revenues for an extended time, Young said.

Of course, it’s hard to strike the balance between generating usage revenue and annoying users who don’t want to dish out lots of money. Ngmoco tested Eliminate Pro in the Canadian market and tweaked it to get that balance for the final product. Young said the company switched to the new business model after acquiring the development studio Miraphonic. The company then began retooling its whole product line. Other titles coming soon are Touch Pets and some unannounced games.

Ngmoco also had a hand in the No. 1 free game. Freeverse’s Skee Ball uses Ngmoco’s Plus+ developer platform, which adds cross-promotion, achievements, multiplayer challenges, leaderboards and user socializing to a game. Developers use Ngmoco’s platform to publish games that can be promoted to millions of other users. Full told, Ngmoco’s games have been downloaded more than 20 million times. That means that Plus+ developers can launch games with the potential to reach lots of those users via the cross-promotion capabilities of the Plus+ technology.

Young said that more than 20 games in the AppStore are using the Plus+ platform. And the company announced two new game studios are using it today: Flipside5 and Backflip Studios. Backflip will use Plus+ in upcoming games such as Harbor Havoc 3D. The goal is to build the largest network of social games on the iPhone with Plus+, Young said.

Ngmoco was founded in 2008 and has received funding from Kleiner Perkins, Maples Investments and Norwest Venture Partners. Rivals for the Plus+ platform include Aurora Feint and Scoreloop.