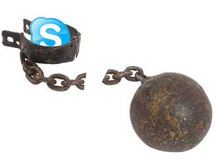 EBay has settled with the founders of Skype, clearing up some nasty lawsuits that had stood in the way of a  Skype acquisition. Now the Internet phone company to be sold to a consortium of investors that includes Skype’s co-founders.

As part of the deal, Index Ventures, a very early original investor in Skype, is being jettisoned from the investor syndicate. Very bad blood had developed between Mike Volpi, a partner at Index Ventures, and the Skype founders after it emerged that he’d tried to go behind their backs to arrange the deal without including them (not great diplomacy, because he was working for the co-founders at the time, as chief executive of video company Joost). Separately, Friis and Zennström had accused eBay of breaching a licensing deal concerning the Joltid technology, and had sued the entire investor consortium.

Marc Andreessen, partner of Andreessen Horowitz, confirmed the deal with VentureBeat this morning: “Everything is settled,” he said. All of the intellectual property disputes — a long saga that centered around the core peer-to-peer technology underneath Skype, owned by Joltid — have also been cleaned up, he said. Joltid has been transferred to Skype, he said.

Andreessen said the company is now free to build for the future. He predicted Skype will become a tremendous company — and he citied significant unrealized potential. One is the exploding smartphone market, where an increasing number of smartphones now have the ability to run Skype. Another is creating a robust set of enterprise offerings: Businesses are using Skype, but almost entirely on an ad hoc basis. Skype can do a lot more to help businesses integrate itself into their current technology infrastructure, he said.

Under the terms, the Skype co-founders get 14 percent of Skype, partly in exchange for capital, but also as credit for their transfer of the rights to Joltid, an entity the co-founders controlled. Friis and Zennström also get a board seat at the new Skype.

The rest of the investor group (Silver Lake, the Canadian pension, and Andreessen Horowitz) together will get 56 percent of Skype. eBay will own 30 percent. The deal values the whole company at $2.75 billion. EBay is expected to get about $1.9 billion in cash as well as a $125 million note.

The deal is expected to close by the end of the year.

Andreessen said there had been two possibilities to the legal tussling. One: continued, really messy litigation (indeed, the failure of Joost had led to lots of acrimony, and we’ve heard there were many facts that hadn’t even leaked yet, as if the court documents hadn’t revealed enough of the ugliness). Or two: Clearing things up, and letting the company realize its upside.

Andreessen recounted what he thinks is Skype’s enormous potential. First, the company is already successful, with a $740 million annualized run rate, and on track to hit $1 billion soon. It is one of the core Internet franchises, and is going mainstream in a “major way,” he said, adding 40 million registered users in the last three months alone. He said Skype is the main way people are doing voice and video calls today. The international long distance voice market is worth $40 billion, and Skype is “all set to go after that,” he said. Next, he said mobile is a brand new opportunity due to the explosive success of the iPhone. Mobile phones have only become “smart enough” to run applications like Skype within the last 12 to 18 months, he said, suggesting that Skype will spread from successful adoption on the iPhone to a host of other phones. Finally, elaborating on Skype’s opportunity to sell to businesses, he said that while businesses are using Skype, they still no have no controls, auditing, metering or connections to other existing infrastructure, such as integration into Blackberry or other business offerings when using Skype. That all will change, he said, when Skype offers businesses something they can “buy.”