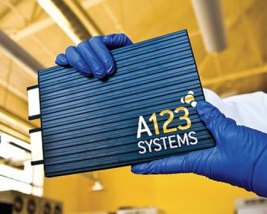 Lithium-ion battery maker A123Systems had a big third quarter. Its $380 million initial public offering exceeded expectations and got investors talking about cleantech exits again. Then it compounded that victory by winning a $249 million grant from the U.S. Department of Energy — one of the largest sums ever given to a battery company.

But neither of these events kept the never-profitable company from reporting even greater losses than it saw in 2008 this week — its first time reporting earnings as a public company. It lost a total of $22.9 million ($1.78 per share) — a noticeable increase over last year’s $18.9 million loss.

This might have been more of a red flag had the company not simultaneously reported a 2.8 percent uptick in revenue, totaling $23.6 million. Its PR team is working overtime, doing a good job of spinning the mixed results positively. Keeping shareholder spirits high is critical for A123, which has become somewhat of a litmus test for other nonprofitable cleantech companies eying public exits. (Smart Grid firm Silver Spring Networks and solar company Solyndra have both been cited as possible contenders for IPOs in 2010).

A123 attributed its larger loss to a spike in operational expenses. Now that the company is turning out more batteries — springboarding product revenue 42 percent — its costs of doing business have logically gone up as well, about 16 percent to be exact, totaling $25.5 million. Some have speculated that it is burning through its cash too fast for growth to be sustainable.

The company clearly benefits from the fact that shareholders are betting on its future, rather than its current performance. A123’s success is largely dependent on the rise of electric and plug-in hybrid electric cars, something that can’t even begin to occur until next year, and probably won’t take off until 2012 or 2013 if at all. Even then though, many of these automakers, Tesla Motors, Fisker Automotive, GM and Ford among them, have already tapped battery-making partners for their green cars, and none of them have chosen A123.

Instead, the company has forged similar deals with BMW and Chrysler to supply batteries for their low-emission offerings. But Chrysler just slashed its electric and hybrid car projects. Whether or not this will impact A123’s revenue remains to be seen. It will need to compete with heavyweights like Panasonic and Johnson Controls-Saft for any new automaker contract.

A123 got an auspicious start, but has yet to establish a solid presence in the market. It has applied for a $233 million low-interest loan through the Department of Energy (an application that will fall under the jurisdiction of its new loan director, Jonathan Silver), which could tip it in the right direction.