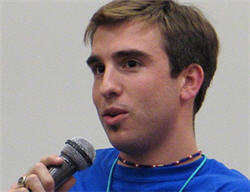 A day after the developer of Facebook’s iPhone app, Joe Hewitt, announced that he would no longer work on iPhone apps, Rogue Amoeba developer Paul Kafasis posted a similar resignation from iPhone-dom.

Kafasis’ iPhone app, Airfoil Speakers Touch, plays music from an iPhone or iPod Touch on other devices. Apple held up the app’s release for weeks, Kafasis says, taking longer than expected and giving out scant information on what was going on.

Eventually, Apple sent him a note claiming the app displayed Apple’s logo and graphic symbols, and that this violated the rules for apps. Yet Kafasis’ app obtains the images using Apple’s APIs, he says, and displays them in the same way Apple’s applications do, to provide user feedback.

“In the future,” Kafasis wrote on the company’s blog, “we hope that developers will be allowed to ship software without needing Apple’s approval at all, the same way we do on Mac OS X.”