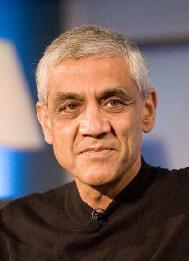 I’m delighted to announce that Vinod Khosla, one of Silicon Valley’s highest profile green investors, will be speaking at our GreenBeat conference next week.

Khosla is important for two reasons. He’s probably the most prolific investor in the sector around, having backed a company in almost every area of clean technology, from ethanol to solar — and was one of the first to make such a bold string of bets. For a while, it became his singular focus. And his firm, Khosla Ventures, just raised $1.1 billion in fresh cash, and will invest much of it in green comapnies. Khosla, by the way, was one of the most successful investors during the first Internet boom, backing companies that built up the optical and networking backbone to today’s internet (including Juniper, now a public company, and Cerent and Siara which together were sold for $11.2 billion in 1999).

Second, at the same time, Khosla brings a refreshing dose of skepticism, at least as it concerns the potential for profitable investments in the “Super Grid,” our term for the much more efficient grid we’re moving toward here in the U.S.

This Super Grid, to summarize, will let consumers put their own power back into the grid, so that it runs both ways. Many investors and experts predict a boom in the sector, as utilities and other players (Google, for example) move to give consumers more control over their power use, and to install more sophisticated communications and security measures to make it all hum. Finally, there’s a need for energy storage, and more efficient transmission overall, as new innovations like electric cars get plugged in to the grid.

I first spoke to Khosla about his views on the smart grid in August, when he announced his fund. He said it was the one area of clean technology he hasn’t invested in. He wants to, but hasn’t found anything interesting. Yes, there’s huge opportunity to upgrade our aging electrical grid to make it smarter, but the the large electrical utilities own much of the transmission, and will make most of the investments themselves; they won’t cede turf without a fight. Some big players, like Cisco and Oracle can also do well by supplying software and communications, but startups with few resources have a hard time getting a foot in the door. Some, like Silver Spring Networks, have worked hard to penetrate the market for years, and have only recently gained traction — but they’re an exception. Most fail.

Finally, the sector is highly regulated, so the fate of startups can be made or broken at the whim of government bureaucrats or policymakers. The Department of Energy recently handed out $3.4 billion to utilities to roll out Smart Grid initiatives. Who ultimately gets a piece is not just up to the utilities, but also the government strings attached to that money.

Khosla will speak on the afternoon of Thursday, Nov. 19, back-to-back with Steve Westly, the former California state controller and eBay executive, who will give a “rebuttal” of sorts. He is more optimistic about opportunities in the grid, has already invested in the area, and plans to give a lot more.

GreenBeat, the seminal executive conference on the Smart Grid, is being held on Nov. 18-19, featuring keynotes from Nobel Prize winner Al Gore and Kleiner Perkins’ John Doerr. Register for your ticket today at GreenBeat2009.com.