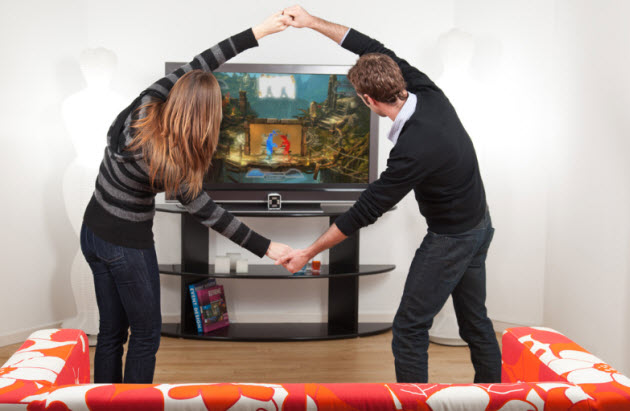 Softkinetic, a maker of software that lets cameras recognize gestures, plans to team up with startup Optrima in a joint venture.

Under the deal, Brussels-based Softkinetic will make software that is used in a 3-D gesture recognition system. In such systems, consumers could play games or other apps by using their own bodies to control what’s happening on the screen. To simulate sword fighting, for instance, users could wave their arms around. With this kind of technology, you could also use your hands to control your TV, instead of a remote control, as pictured below. 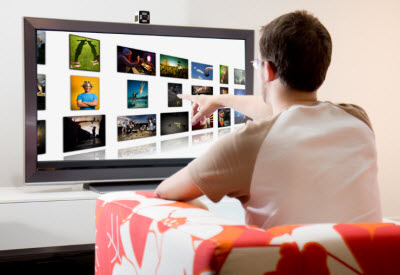 Optrima, meanwhile, will design chips for cameras as well as cameras themselves. The goal is to offer hardware makers a complete solution so they can get consumers to play with their technology. Optrima, also based in Brussels, is working on low-cost chips that use the complementary metal oxide semiconductor (CMOS) technology that is cheaper to make than other 3-D gesture control chips.

Beyond making the recognition software, Softkinetic is also making its own games, such as the pictured Silhouette game. Michel Tombroff, chief executive, said the goal is to do everything necessary to get the adoption of the new technology off the ground.

Both companies have been working on the technology for about seven years each. Softkinetic is investing an unspecified amount of money in Optrima, which is headed by Andre Miodezky. The entire solution — software, games, and hardware — will be ready to launch in the fall of 2010. The technology will be compatible across a variety of consumer electronics platforms.

Like another 3-D gesture control startup, Canesta, Optrima uses “time of flight” technology to figure out the position of objects in a camera’s view. It then can tell exactly how a person is moving and translate those movements into games or gesture controls for devices such as TVs. Optrima has patented its technology. It has eight employees while Softkinetic has 24. Tombroff said Softkinetic is raising a round of money now.