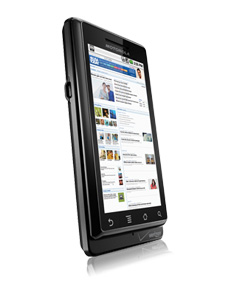 Motorola probably sold 250,000 Droids in the first week, making it the Android platform’s first legitimate challenger to the iPhone, according to analytics firm Flurry. Those figures are more than four times what HTC and T-Mobile were able to do with the MyTouch phone and about one-sixth of what Apple pulled off with the iPhone 3GS in their first weeks. (Keep in mind that Apple launched that model in eight countries, not one like the Droid, and already had a base of users ready to upgrade from older versions.)

Flurry made its estimates through the analytics service it provides for more than 10,000 apps. The company says the apps that it tracks are on two out of every three iPhone and Android handsets worldwide. So it derived an estimate from the number of new Android handsets it detected that week and cross-checked its methodology against actual sales numbers for Apple’s iPhone 3GS.

Flurry’s estimates are also broadly in line with others’. Broadpoint AmTech’s Mark McKechnie said Motorola did 100,000 phones in sales during the first weekend, while Macquarie’s Phil Cusick said the phone had 200,000 sales in its debut weekend.

The launch of Droid signals the beginning of a viable platform alternative to the iPhone as Android builds critical mass. As major companies continue to vie for a piece of the exploding Smartphone market, the consumer has never had more choice and innovation in the mobile industry. With Droid, Motorola has raised the bar for Android handsets, contributing to an ever-growing base of Android handsets upon which applications developers can build a business. 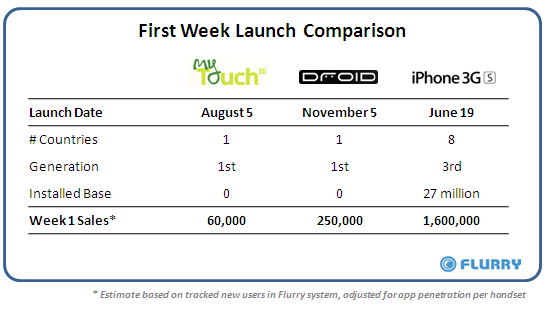