Popular location-sharing game Foursquare has just gone global with the announcement of 50 new cities worldwide, doubling the service’s previous coverage. The company says it chose the cities based on feedback from users requesting the service.

The new cities take the service across six continents, but it’s not so long since it was a strictly a tech-insider phenomenon in the US. As cofounder Dennis Crowley (pictured below) told me last week “The goal is to build something that everyone wants to use”. The company first took its service outside the US almost by accident.

It started, like a Coen Brothers film, with two Dutchmen in Texas. Young Dutch entrepreneurs Alper Cugun (of Tipit) and Robert Gaal (of Wakoopa) discovered Foursquare at this year’s SXSW conference and had so much fun collecting points that they resolved at the airport to bring Foursquare to Amsterdam. On April 7 Gaal sent the first email to Crowley, Cugun got the venue data together — Amsterdam restaurants and other destinations worth including in the game — and within a few weeks Foursquare’s first European city was up and running. It wasn’t an overnight success. Apart from anything else, the iPhone application wasn’t approved for the Netherlands until much later, but they kept checking in. “It’s just addictive,” says Cugun. “It lures you in.”

For those unfamiliar with Foursquare, it’s a game that lets friends track each others’ location and earn points and badges by checking into various venues throughout a city. The player who checks into a particular venue most frequently earns the title of Mayor of that location.

Gaal explained how there are certain fundamentals in how young people socialise: hit as many places as possible, find your friends, prove your social worth and be conspicuous about it. Foursquare’s game mechanics for collecting points and competing to be the mayor of a particular location fit in perfectly with those objectives. Soon, pitched battles were breaking out over rankings on the Foursquare leader board in Amsterdam. Things stopped just short of defenestration of rivals for the title of mayor of De Burgermeester. “The app gets mapped onto a part of your brain,” says Cugun. “It becomes like an extra sense. When you are outside the scope of Foursquare, it’s like your peripheral vision is gone.”

One of the most interesting things about Foursquare is the way it shapes social behavior. Players use it to avoid people as much as to find their friends. A new behavior has emerged in New York called the “pre-check in,” where a user checks in on on the way to a venue or even earlier. When friends see the check in they will assume he has arrived and will be “fooled” into showing up before he does. Players will also purposely check in at a venue far away from where they know a friend will be, to passively send a signal that they probably won’t catch up with that friend tonight. One notable aspect of Foursquare in Amsterdam was that it wasn’t just for tech insiders. Gaal says “First it caught on with our friends, not necessarily with the tech-savvy crowd”. This has obvious relevance to Foursquare’s ambitions to go from tech media darling to mainstream application. More on that below.

So what is Foursquare, really? 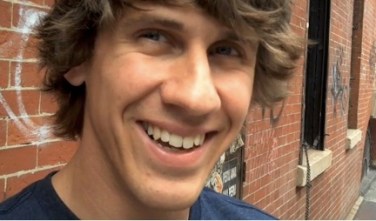 This answer isn’t that straightforward. As Crowley says, “If you put 10 different people around a table, they will give you 10 different answers about what it does”. Is it a social utility, a recommendation service, a game? Foursquare actually brings multiple ideas together; presence, location-tracking, the real world as a video game, personal metrics, discovery and even “mediated serendipity”. There is something unique about that odd mixture that users (100,000 of them to date since the launch in March of this year) find very compelling. Like smokers who need a cigarette first thing in the morning, checking in is the first thing players do when they arrive somewhere. It’s hard to avoid some comparison to the practice of sending tweets about what a great time you are having instead of having too great a time to report on it. But if Twitter is about what you are doing now, Foursquare is about “what next?”

I asked Crowley about his objectives for Foursquare. “Now that people are giving us their location, and have been doing that over a set period of time, what other interesting things can we bubble up? What can emerge out of that? That’s something we never got to figure out with DodgeBall (an earlier service sold to Google in 2005), and that’s the primary reason we are doing Foursquare. With Dodgeball we didn’t really understand how much value the history of where you have been can have. Foursquare is specifically built to take advantage of that history.”

When it comes to competitors, and there are plenty, including Loopt and Gowalla, Foursquare doesn’t seem too worried. Crowley says, “We feel like we know what we are doing. We are not focusing too much on the competitors because we know exactly what to build next.” On the implications for Foursquare if Facebook decides to buy a location-tracking company, Crowley is cagey. He merely suggests that since privacy is a very important part of Facebook’s DNA, the company will be extra careful in how it approaches location-tracking.

Crowley sees Foursquare’s business model being based on three main sources of revenue:

* Sponsorships and branded badges, which form part of the marketing campaigns of major brands.
* Customer loyalty programs from retailers and large hospitality business chains. There is currently only one mayor in each venue, but these businesses want to reward a selection of their best customers.
* Local merchants might reward customers for things like introducing new clients to the store. Foursquare can detect which users are friends, when they checked in together, and chop up all kinds of other interesting statistics.

Foursquare’s new cities bring the total number of cities covered to 100. The Blackberry version is due out sometime in December, and the objective is to get the application on to many more devices. The last few months have been spent refactoring the infrastructure rather than adding new features; what Crowley calls “3 months of awful”. That should be changing soon. The features most requested by users are new cities, new badges (apparently there are endless ideas for these) and the Blackberry version.

Crowley’s visit to Amsterdam also reminded him of how important the new user experience is. When you are in an unfamiliar neighborhood Foursquare “should give you something awesome to do” even if there are not many other players yet. Other new directions could include incentivizing people beyond entertainment. Intriguing possibilities in that area are suggested by Foursquare’s recent partnership with BART and the phenomenon of users going to the gym more often just to earn the Gym Rat badge on Foursquare.

Foursquare may finally be going global but Amsterdam was happy to be the first at the party. As Cugun says, “It may be worthless to be the mayor but it’s cool to have the crown next to you”.