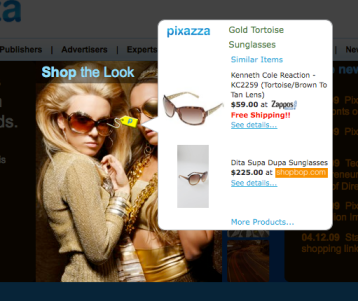 Pixazza, a Google Ventures-backed startup, is opening up its crowdsourced photo-tagging service, which can turn any Web site into an online store.

The Mountain View-based startup uses an army of taggers to identify products and link them to shopping sites like Amazon or Zappos. For example, you might see a photo of actress Penelope Cruz wearing a new outfit on a fashion blog. If you roll over the image, you’ll see links to similar products that you can buy. Pixazza then turns around and shares the advertising revenue with publishers.

They’ve initially tested their technology on a handful of celebrity gossip web sites like Just Jared and Celebuzz. But they’re taking that technology today, scaling it up and making it available to anyone.

“We have about a dozen sites using it right now out of literally thousands that applied,” said Pixazza chief technology officer James Everingham. “We’re hoping to escalate that very rapidly into 2010.”

He says the company has about 100 taggers who are paid on a commission model, related to whether a shopper actually visits the destination or buys the item. Pixazza’s team is experienced with large, distributed groups of workers — Everingham was the CTO of LiveOps, a call center company with 20,000 independent contractors.

Although the job sounds a bit rote like a mechanical turk‘s job, Everingham says the company gets a few hundred inquiries about work a week. They test the prospective taggers out over time, and then give the effective ones more permissions to link content.

“Computers tend not to be good involving judgment and tastes,” Everingham said. “We’ve built a user interface that lets our taggers search through our inventory and narrow it down very quickly.”

Pixazza raised $5.75 million in a first round of funding from August Capital, CMEA Capital, and Google.