Next Island is the latest company to launch an ambitious virtual world. But this sci-fi adventure paradise comes with an interesting twist: time travel. The company is announcing today that it is building a world in MindArk‘s massively multiplayer online virtual universe, Entropia Universe.

That means it has licensed virtual world technology from MindArk, whose technology is behind Planet Calypso, which until now has been the only virtual world in the Entropia Universe. Next Island will be the “planet” going live in the virtual universe. Its private beta begins in less than 30 days.

Next Island will have a very different personality than Planet Calypso, a sci-fi massively multiplayer 3-D online game. While the paradise-adventure theme is the home state of the world, players will be able to travel in time to Roman or Biblical times as the company expands the world in 2010.

The world will be free to play for users. They can create, purchase and trade virtual goods within the world, which lets them cash out, converting virtual money into real world money. That’s because Entropia runs its own virtual bank, which has been recognized as a real bank by Sweden (Entropia Universe is based in Sweden.) At some point, people will be able to go from one planet to another, said David Post, founder and chairman of Next Island. In fact, Next Island is already promoting itself in the Planet Calypso community, which numbers around a million. But Post hopes Next Island will attract its own unique crowd. Eventually, it could be part of a whole constellation of virtual worlds.

“You could think of it almost like the beginning of multiple channels on cable TV,” Post said in an interview.

Post founded Next Island in 2008. He was a successful entrepreneur who founded and sold both Page America and Cellular Systems. So he funded Next Island himself in the hopes of reviving a childhood fantasy. Each day for a brief time when he was young, starting at the age of nine, he wrote the story about the parallel universe of Next Island, where it seems like paradise, but where danger lurks under the surface. 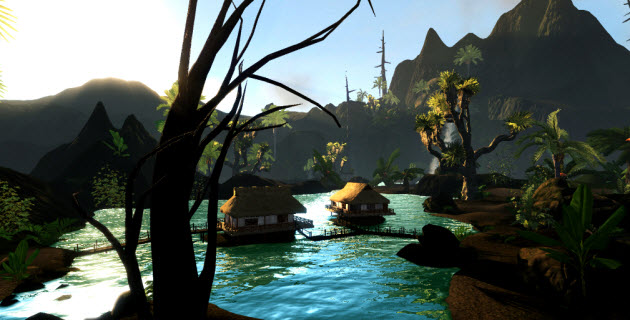 The back story is that the rich people of the world buy a set of islands and then create an isolated paradise hidden from the rest of the world. One of the islands has a portal into time which can be used to visit places such as the Amazon jungle in 400 B.C. Players will teleport from age to age. If players acquire weapons in a modern age, they won’t be able to take them back to an earlier age. They’ll have to earn new weapons and use them to hunt monsters. You’ll also mine for valuable resources and use them to make things that can be sold for virtual currency. The game will reward players who innovate, use their smarts, and think more strategically, Post said.

Post said he waited a decade to put together this business. About three years ago, he got serious about doing a virtual world. He met the MindArk people and decided to leverage all of the planet-building resources they had already developed. He recruited John Jacobs, who goes by the avatar Neverdie in Calpyso, to help head his development studio. Jacobs became famous in 2005 because he mortgaged his house and spent $100,000 in real money on a virtual asteroid in the Entropia Universe. He opened a place called Club Neverdie and turned it into a real business. Post also recruited other luminaries in the game industry. The company now has 24 employees.

In the game, players can complete missions, such as quests to find crystals that they can use to move from one point in time to another. But there will be plenty of places for players to explore, and they can settle down and open their own businesses if they prefer.

It will be interesting to see if the world takes off. Virtual worlds have been in a funk during the recession, with many of them dying off before launch. Much of the excitement has now shifted to social networks such as Facebook, where social games are simpler and less complicated than 3-D worlds like Second Life. And a lot of the players who do like 3-D worlds are wed to Blizzard’s World of Warcraft.

Post said his company is raising a round of money. First it plans to close on a $500,000 bridge loan and then raise a $3 million round after the world gets some traction. The company plans to launch an open beta in January and then launch the full world in the spring. Post’s goal is that this world with a real cash economy and fun game play will evolve into one of the first truly mass market virtual worlds. Skepticism is of course in order, but Post is one of those dreamers who has had a habit of success in the past.