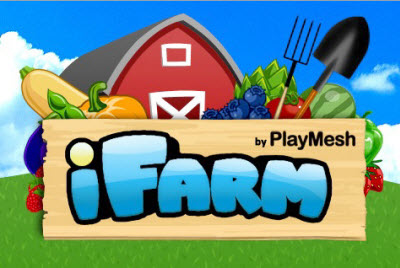 PlayMesh became famous on the iPhone when it launched its iMafia game in January. Now it has scored big again with iFarm, currently the No. 1 free app on the iPhone.

In less than 24 hours, iFarm has jumped into the top 25 ranks on the iPhone AppStore, claiming the position as the No. 1 farm game. This game is probably worth watching closely, since farming has become such a huge money maker on Facebook.

Zynga’s FarmVille has become the world’s most popular game, with 65 million monthly active users on Facebook. (That’s an audience of one in every five Facebook users). Farm games have also been a runaway success in Asia. But they haven’t yet tapped their full potential on other platforms.

iFarm could draw in some good revenues from virtual goods. PlayMesh’s iMafia app had a novel virtual goods model in the days before Apple had its own way of embracing what has become an extremely popular business model for monetizing virtual goods.

The iMafia game was a hit and was designed to let players earn points within the game if they purchased other PlayMesh games. But PlayMesh ran afoul of Apple’s restrictions and went silent for a while.

Apple, meanwhile, has enabled a virtual goods model by allowing purchases to be made inside apps now. The iFarm game doesn’t yet have Apple’s in-app purchases, but PlayMesh is working hard to update the game so that it does. For now, it uses its own virtual goods system; if you want to buy a gnome to decorate your farm, you pay $1. In doing so, you’re actually buying one of PlayMesh’s other paid iPhone apps.

Mountain View, Calif.-based PlayMesh has created 15 top-25 apps on the iPhone, including iMafia and Link4 Online (a game where you link four spots in a row in a multiplayer race). It has more than 5 million registered users and serves over a million plays a day in Link4 Online.

The company managed to beat other players such as Zynga and the creators of FarmTown, Slashkey, in coming up with an iPhone version of a farm game, where you can raise crops and sell them for virtual currency, or coins. Players grow stuff, decorate their farms, rise in levels, and earn coins. Farm sizes can stretch to 100 plots of land.

The company’s goal is to bring social games to the iPhone, said Charles Ju, chief executive of PlayMesh. PlayMesh was founded in July, 2008. The company has five employees.