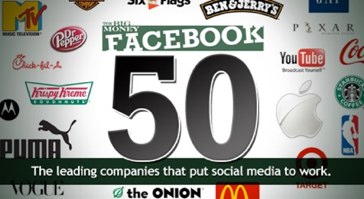 For companies to stay relevant these days, and to actually matter in a digital age, they increasingly have to be involved on social networks—Twitter, Facebook, and the like. Everyone’s trying to connect with their customers, to be human, and to make a whole lot of money. But who’s doing it well?

That’s the question that The Big Money, from Slate Magazine, went out and asked. Their answers are in a report published today, The Big Money Facebook 50, listing the top 50 brands with official pages on Facebook – plus a lot of interesting analysis. With a couple of prerequisites (the company had to have at least 200,000 fans on Facebook, had to be active, and had to have shown growth thanks to the network), The Big Money charted just who the top 50 brands are on the global superpower that is Facebook.

The top 5 are all huge brands with huge Facebook followings: iTunes, Victoria’s Secret, Disney, Starbucks, and at number 1, Coca Cola. The list as a whole is equally diverse, with everything from Skittles to YouTube having figured out how to successfully market to and connect with people on Facebook.

One of the findings from The Big Money Facebook 50 was that there’s no rhyme or reason to success when it comes to social networks; everyone who does it well, does it somewhat differently. Some companies, like T.G.I Friday’s, promised free food to all their customers who became a fan of a particular guy on Facebook, and it brought them nearly a million fans within a month. Skittles even redirected its website, skittles.com, to its Facebook page for a while, and gained three million fans from it.

Coca Cola, too, is an interesting example of how to market successfully on Facebook: The page was initially created without any strategy, or even real content; it quickly exploded in popularity. Someone at Coke realized how useful it could be, and added to the pages things like videos made by fans, some recycling initiatives, and even a “Spin the Bottle” app for the iPhone and iPod Touch. I kid you not.

The Big Money Facebook 50 is a lesson for any company not currently leveraging social media like Facebook and Twitter: the big players are doing it, and it’s a way anyone can successfully connect with customers and fans, from Fortune 500 companies to mom-and-pop shops. It also means that, if you make delicious food, Facebook’s going to love you dearly.

The Big Money will also release the Twitter 12, a similar story about how brands are using Twitter, in the coming days. 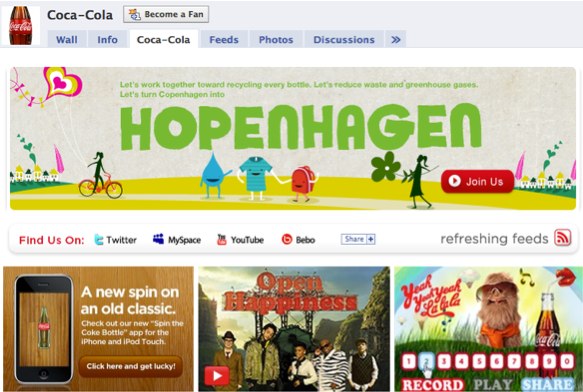