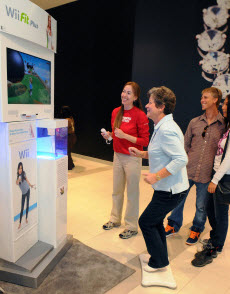 Game consoles flew off the shelves during Thanksgiving week thanks to discounts and marketing promotions that finally brought gamers into stores.

Nintendo said it sold more than 1.5 million hardware units in the U.S. during the week of Thanksgiving. That equates to 2.5 systems sold every second. The number includes sales of the Wii console as well as the DS and DSi handheld units.

During the week, Nintendo said it sold more than 550,000 Wii consoles at the new price of $199.99, down $50 from the end of September. More than a million handheld units also sold during the week (Sunday Nov. 22 to Saturday Nov. 28), a sales record that beat the company’s previous record of GameBoy Advance units sold during Thanksgiving week in 2002.

“Holiday shoppers are finding value in our products’ prices, and through a game-play experience that is unique to Nintendo,” said Cammie Dunaway, Nintendo of America’s executive vice president of sales and marketing.

Meanwhile, Microsoft said it sold twice as many Xbox 360 consoles during Thanksgiving week compared to the week before. Spokesman David Dennis said Microsoft’s console sales took off a couple of weeks ago on two fronts. First, Walmart began selling bundles of the company’s Xbox 360 Arcade — the lowest priced unit at $199 — with $100 Walmart gift cards. Also, the $399 Xbox 360 Elite model based on the Call of Duty Modern Warfare 2 game also sold very well starting on Nov. 10. Microsoft cut the price of its mainstay console by $100 on Aug. 27, but retailers have been aggressively bundling games with the consoles. On Black Friday, for instance, Best Buy bundled the most expensive consoles with a total of six free games.

Dennis said that games such as Halo 3: ODST and Forza Motorsport 2 are selling well, but he declined to provide specific numbers.

[Update: Sony spokesman Patrick Seybold said in a statement, “The 2009 holiday season got off to an amazing start for PlayStation, with all key retailers showing a significant increase for PS3, PSP and key holiday titles over Black Friday and the holiday weekend. PlayStation 3 demand was at an all time high with the system selling more than 440,000 units for the week ending 11/29/09.]