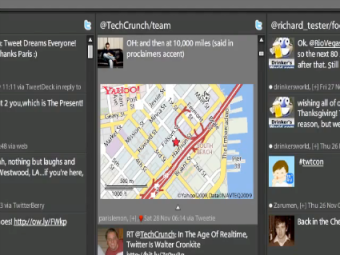 Tweetdeck, the most popular external client for Twitter, underwent a major overhaul today. It’s adding in LinkedIn updates, along with all of Twitter’s new features, including geolocation, retweets and lists.

Like other clients, which help you read Twitter updates quickly, Tweetdeck is morphing into a social media dashboard by aggregating data from multiple social networks including Facebook, MySpace and now LinkedIn. This means you can read status updates from all four services in one space.

What’s interesting about the update is Tweetdeck’s unique integration of Twitter’s new retweet feature, which has divided the community. The old way of retweeting, or sharing a tweet from someone else, was done manually. You would type ‘RT’, the Twitter handle of the person, and then the retweet. And maybe you’d add in a comment or thought about what the other person said.

But when Twitter decided to add formal support for the feature, its version wouldn’t let users comment on retweets. It would automatically just copy what the other person said. Tweetdeck lets you go both ways. You can click one button to do it Twitter’s way, or another to add a comment or edit the tweet.

Tweetdeck’s lists and geolocation integration are pretty standard compared to what other clients have done. You can convert groups of Twitter accounts you follow into lists, import the lists you’ve built on Twitter.com as extra columns, or build your own inside Tweetdeck.

You can access Twitter’s geolocation feature by clicking a red dot under tweets. It will drop down to show you a map of where the tweet came from.

Tweetdeck has raised more than $2 million in two rounds of funding.