What is surprising in this case is that well-known and respected Silicon Valley venture capitalists and others provided money and oversight to this company, even as the company tumbled out of control under their noses. The company’s officers committed “fraudulent” activity, according to Canopy’s General Counsel Dan Stevenson, though he did not go into much detail. But apparently this included things like forging statements with letterhead from its auditing firm KPMG, according to a report at TechCrunch.

There are still few facts that reveal how this could have happened. Indeed, Silicon Valley’s business community has been critical of all the oversight rules passed in recent years, including the passage of the Sarbanes-Oxley Act, which have been designed to avoid things like this (though, of course, if someone is lying to you, there’s not much that laws can do about it). 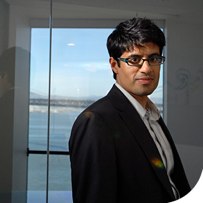 Company management discovered the fraud and “significant financial and accounting irregularities” earlier this month, according to counsel Dan Stevenson in the bankruptcy affidavit submitted to U.S. Bankruptcy Court’s Northern District of Illinois. The affidavit which was actually filed last week but only came to light last night. The company formed a committee of outside directors, attorneys and forensic accountants to investigate, which led to the removal of two officers from management. These were President Jeremy Blackburn, who resigned, and Chief Technology Officer Anthony Banas, who was placed on leave, according to a report at Inc Magazine.

Chief Executive Vik Kashyap (pictured right) last week resigned as CEO but said he was not involved in the fraud and would stay on as chairman of the board.

The company could not be reached for comment. We also tried reaching Foundation Capital, one of the leading venture backers of Canopy, but they did not respond.

Investors include Foundation Capital, GGV Capital and Spectrum Equity Investors, who have pumped about $105 million into the company, including $75 million in a recent series D round over the summer. More than $39 million of that was used to buy back shares from existing investors. Granite Global Ventures is not specifically named as one of the beneficiaries of that, but previous reports said the firm partially cashed out on the round.

Canopy has between 200 and 999 creditors and owes between $50 million and $100 million, according to the filing. A lender, Venture Lending & Leasing IV, has taken control of a Canopy bank account worth $5.4 million, and some customers have canceled their accounts.

Canopy has cut its 123-person workforce down to 31. The FBI has reportedly launched a criminal investigation.