We’re excited to announce that we’ve picked the winner of the DiscoveryBeat Apps Contest, sponsored by Flurry. The winner will be able to attend our DiscoveryBeat event on Dec. 8 at Automattic Lounge on Pier 38 in San Francisco. 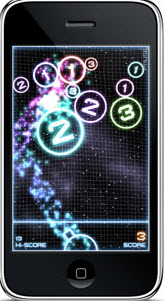 And the winner is: Orbital (pictured right), an iPhone game from developer Bitforge. It’s hard to describe, but it’s addictive. You shoot orbs up into space and try to knock out previously launched orbs, without allowing any orbs to fall below the line across the bottom of the screen. That gets harder to do as the screen gets crowded and the orbs bounce around and are affected by the pull of gravity. This physics-embued game has had modest sales of 27,000 to date since its launch on Sept. 19, so it is truly an undiscovered gem. The average user has played for 5.5 hours, with some users topping 100 hours. The app was nominated by Sam Dalsimer at Triplepoint.

The runners-up are: Tilt: An Adventure in 1.5 Dimensions, Today Todo Pro, FaceFighter, and AlwaysOnPC.

In Tilt, you tilt the iPhone to control a little character that eats carbon out of the air; it’s an iPhone game with a story and is currently in beta testing and should be available in the AppStore soon. It was created by Nicole Lazzaro and her team at XEODesign.

Today Todo Pro is a productivity app that lets you use your iPhone to manage your daily to-do list. It does so with a simple interface, allowing you to swipe at the screen if you want to get rid of one of your to-do items. You can create a to-do item by turning the iPhone 90 degrees, taking advantage of the accelerometer controls. It debuted in September and was created by Spielhaus.

FaceFighter is a boxing game created by Appy Entertainment. It grew out of a photo technology created by the company for its first app, Appy Newz. It’s a lot of fun punching a cartoonish boxer (by tapping the iPhone touchscreen) and doing real (comic violence) damage to the fighter’s face. You can also snap a picture of a friend and fight via multiplayer over Bluetooth. The iPhone app debuted on Apple’s AppStore in June.

And AlwaysOnPC is a $25 app (yes, you heard right) that turns an iPhone or iPod Touch into a productive, full-fledged computer. You can use it to create a virtual cloud-based computer experience, where you connect with a remote computer and run applications that could never run on a mobile device. The app was created by Xform Computing and debuted on the AppStore in August. A version for Google Android-based Droid phones is coming next quarter.

Peter Farago, vice president of marketing at Flurry and I were the judges. We were honored to get 22 entries altogether. One arrived too late. There were two duplicates. And four nominees were disqualified because they were already too well known. We wanted to find apps that were truly undiscovered. We hope you’ll agree that these ones are worth trying out.

“We want to congratulate all of the finalists who stood out from among a strong field of entrants. Each presented elements of innovation, high production values and unique use of iPhone hardware functionality.” said Farago. “Orbital, our choice for grand prize winner, stood above its competition with its highly original concept, insane replay value and ultra-cool polish. Congratulations!”

The winner gets two free tickets to DiscoveryBeat ($300 value). And the winner and all of the runners-up also get the following:

1. Free promotional credit of $500 for AppCircle which will cross-promote the winning developer(s) application across Flurry’s network of participating AppCircle developers. Participation in AppCircle guarantees additional downloads.

Note that to redeem these prizes, developers need to use, or be willing to add, Flurry Analytics and Flurry AppCircle.

Please be sure to sign up for DiscoveryBeat. Tickets are here.