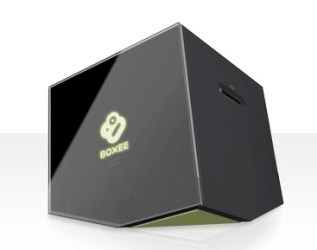 New York based startup Boxee is looking to become the conduit through which people view and share web based content on their TVs. The company’s software transforms your laptop into a set-top box like Roku. While I control Boxee using the Apple Remote from my Macbook, many users are desperate to ditch their laptops, demanding a dedicated media device with Boxee at its core. Boxee answered Monday by announcing a D-Link built Boxee Box will be in stores in Q2 2010, with the new and improved Boxee Beta.

At its launch party today, Boxee Beta debuted to a raucous capacity crowd of 650 people. The vastly improved Boxee Beta user interface is clearly optimized for use with a remote control, allowing for easy content discovery. Through partnerships with Internet TV guide Clicker and social conversation tool Cliqset, the improved social media functions include a simplified interface for finding and sharing content on Facebook and Twitter.

Boxee Beta prominently displays a column consisting of content shared by your Facebook and Twitter contacts on the left side of the interface. The superior sharing capabilities and the potential for increased user adoption through the Boxee Box open up a host of viral marketing potential, which was shown off in an app Universal Pictures demoed promoting its new movie, “The Wolfman”. The app lets users view the trailer in HD and learn more about the characters. Future movie promotions could include more interactive features like choosing your own adventure. 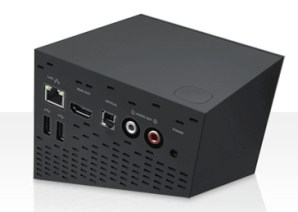 Chief product officer Zach Klein, formerly of Vimeo and College Humor, said he expected the Boxee Box to be available in stores in the Q2 of next year with an anticipated price of $200. The product, which Klein described as, “a sunken cube”, was no taller than a coke can and looked light when handled. It will come with an RF remote, allowing users to control the unit from other rooms. Boxee will remain open source, with the D-Link box to be the first of many set-top boxes that will run the Boxee software. Boxee CEO Avner Ronen also said that the Boxee Box does not have Netflix integration as of yet, although he hopes to have it done shortly. In a crowded marketplace where Boxee is competing with the likes of Roku, Playstation 3, and Xbox 360 the thing that could give it an edge is the open source developer community.

A central feature of Boxee Beta is it gives users the ability to purchase content directly, a potentially significant revenue stream. Boxee hopes the promise of revenue will spur adoption by content providers looking to monetize web-based content. Ronen said, “The best way to fight piracy is to make your content available online.” He noted that most content viewed through Boxee was streamed over the internet, including paid services like Netflix and MLB.TV.

Boxee is actively working to integrate with cable outlets and content producers. Ronen said that the company has two full-time business development executives reaching out to cable providers and content creators. While content providers want to bring more content to the web and monetize it, many in traditional media see Boxee as a threat, cannibalizing the existing advertising, royalty and subscription-based revenue from traditional TV viewing. Web video giant Hulu has been especially aggressive in prohibiting Boxee, and more recently Clicker, from streaming its vast library of TV shows and movies. With Comcast now controlling NBC/Universal, the prospects of Hulu on Boxee would seem even more remote. Ronen was not phased, however, predicting that Hulu would ultimately be available via the Boxee platform.