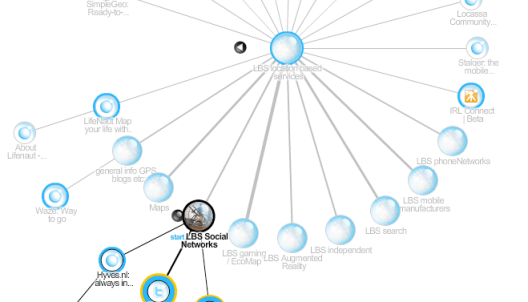 If you’re the type of obsessive-compulsive person who needs to organize the firehose of information confronting you every day on the web, then Pearltrees might work for you. It’s a visual social bookmarking service that allows you keep track of what you’ve read and establish relationships between different pieces of content.

Other people can follow, link or add to the trees you’ve built, so there’s a social element to the site. On the back of all that data, Pearltrees is also developing algorithms to surface the most relevant or significant content as judged by the amount of branches connected to them. It is like their own equivalent of Google’s PageRank, the breakthrough approach the search giant used to mine links and return relevant results.

Pearltree’s approach involves a pretty unique user interface, and it will probably work better for people who think visually. The Twitter integration will also be a big plus, because it taps into a natural user behavior and doesn’t require any extra effort to save links the way a browser add-on might. Still, I’m skeptical that the majority of users will want to organize the old content they’ve read into trees.

Paris-based Pearltrees has raised 2.5 million euros from angel investors. They’re also pursuing a pretty tough revenue model in the form of either advertising off pearl trees or premium accounts for publishers that embed Pearltrees in content. To pull it off, they’ll either have to achieve massive scale with hundreds of thousands or millions of users or they’ll have to be a compelling enough service to publishers that they’ll be willing to fork over a subscription fee.

The company’s beta is launching in Wednesday as Europe takes the spotlight for technology this week with the Le Web conference in Paris. A group of tech bloggers got to take a look at the company today as part of the Traveling Geeks tour.