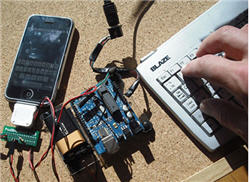 iPhone service provider AT&T plans to test ways to get the company’s heaviest network traffic hogs to stop spending all waking hours choking AT&T’s pipes with their unlimited-access phones. But there’ll be no draconian usage limits or surprise fees.

Ralph de la Vega, who runs the wireless and consumer arms of the company, spoke to attendees and reporters at a conference in New York held by financial services giant UBS. He said Dallas-based AT&T would offer “incentives,” rather than punishment, to get the top users to back down on their data use.

The top three percent are responsible for 40 percent of the data traveling through AT&T’s network, said De la Vega. “What we actually found out is customers didn’t know how they were using data,” he told the Wall Street Journal. “But once you alerted them to it, they actually reduce their consumption significantly.”

iPhone buyers can get an unlimited data plan from AT&T for as little as $69 per month base price. In fact, unlimited plans are the only kind AT&T currently sells. It makes the iPhone plus plan an attractive package, but AT&T has been unable to keep up with the resulting demand for data downloads and uploads. If De la Vega is correct, it might be easier than expected to keep AT&T’s data pipes from clogging again.

(Bonus Trivia: It was Ralph de la Vega, then the COO of Cingular before it became AT&T Mobility, who suffered the onstage humiliation of debuting Motorola’s doomed iTunes phone onstage in 2005. De la Vega flew to San Francisco from New Orleans, where he had been heading Cingular’s restoration of communications in the wake of Hurricane Katrina, to demo the Motorola ROKR and its TV ads to a VIP audience. Alas, he was immediately followed by Steve Jobs, who pulled an iPod Nano out of his pocket and, holding the gumstick-sized music player aloft, erased the memory of the ROKR from attendees’ minds. Being a wireless exec seems to guarantee a life of uncool.)