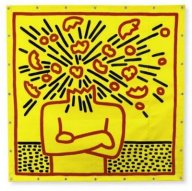 The average American sucks down 34 gigabytes of data per day, half of that from video games, says the latest update of a study by two researchers at the University of California in San Diego. That’s enough to fill 7 DVD discs. Every day.

After video games (55%), the next highest data volume is TV (35%) and movies (10%). Computer data makes up one quarter of one percent, because most of it is text, which hardly takes up any data at all.

All told, Americans consumed 3.6 zettabytes of information in 2008, and that despite the use of advanced compression algorithms to shrink down our media.

Surprisingly, the rate of data growth has been slow, much slower than the frequent doubling of computer chip components measured by Moore’s Law. Yet over the past 28 years, this growth has multiplied itself into a four-fold increase in bytes and a 140 percent increase in the number of words absorbed by Americans since 1980.

The study, available as a 37-page PDF download, breaks down digital data consumption — not counting that done at work — into several categories. 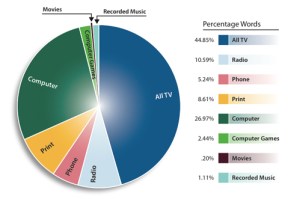 Here’s the nerd’s version of an executive summary: