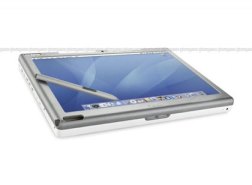 Dell plans to launch a tablet computer — one with a touchscreen instead of a mouse and keyboard — based on Google’s Android mobile operating system, says a report attributed to “multiple black ops sources” on gadget site Pocket-lint. The new product will allegedly be shown off at the gadget industry’s biggest trade show, the Consumer Electronics Show in Las Vegas in early January.

Dell has not yet responded to requests to confirm or deny the rumor. And at this point, there are no photos of the rumored device on the Internet, only artists’ conceptions of possible tablet devices.

If the story is true, Dell’s tablet has a chance to beat another rumored tablet from Apple to market in a new product category.

Unfortunately, the rumored device is also rumored to have a 5-inch screen, closer to that of a smartphone than a personal computer. Pocket-lint names the Archos 5 Internet Tablet as a competitor, but the Archos’ 4.8-inch screen is also small to be considered a tablet. A rumored touchscreen computer from Asus, similarly, is said to have a screen in the five to seven-inch range. These computers seem designed to compete with the Apple’s 3.5-inch iPod Touch — an iPhone without the phone and camera — rather than breaking new ground.

Such smallish screens aren’t in line with the original concept of a tablet PC, whose touch-sensitive display area would be the size of a clipboard or a laptop. Fantasy drawings of Apple’s unicorn-like tablet invariably give it a generously sized screen.

A Silicon Valley startup effort, the JooJoo tablet, is based around a newly-available 12.1-inch touchscreen. Now that’s a tablet. But the JooJoo is not yet in customers’ hands, and its $499 pre-order price seems a large amount of money to risk on an unproven twelve-person company’s first model. A lower-priced tablet with a laptop-sized screen from a big-name brand seems more likely to be the hit product that finally launches the genre.

The tablet computer has, in the past year, gone from sure-to-fail niche product to eagerly-anticipated Next Big Thing. That’s because the original tablets were envisioned as workplace tools, replacements for the clipboards and binders carried by doctors and other knowledge workers. They were designed to be tapped at with a stylus, a design obsoleted by the iPhone’s wildly popular touchscreen in 2007. They were, all in all, boring.

The new vision for tablets is couch computing — a way to check Facebook, watch YouTube, tap at Twitter, and putter around the Web in a relaxed, leaned-back way rather than leaning intently into a desktop or laptop keyboard for high-speed work.

Do you ever lie down with your laptop on your chest? A slim, light tablet — basically a touchscreen with some miniaturized guts behind it and a wireless Net connection — would be much better than balancing a folded-out laptop on your belly. Should anyone actually ship a full-sized tablet, it would be the computer you could keep tucked under your pillow.