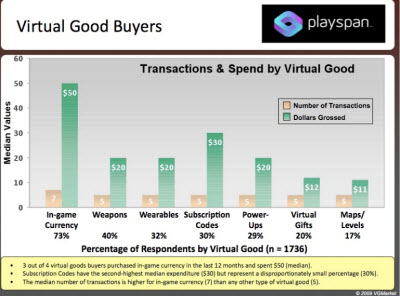 Consumers are embracing online games that are free to play, with options to buy virtual goods such as extra weapons or decorative clothing, a new survey confirms.

The survey by virtual goods platform maker PlaySpan and market researcher VGMarket shows 58 percent of players bought digital goods in a free-to-play game. In those games, you play for free but can buy things for small amounts such as a quarter.

One interesting tidbit is that the 42 percent who haven’t bought a virtual good online haven’t done so out of fear. About 42 percent of these people worry that they could be scammed when trading with someone who isn’t part of the game’s official marketplace. And 42 percent worry that they could be cited for terms of service violation. That suggests that online game operators who sanction an official secondary market, where players can trade goods with other players, can help boost participation in virtual goods purchases.

The companies surveyed 2,425 customers across PlaySpan‘s various properties. Portions of the report were released earlier this year, and now the full report is available for free. About 89 percent of the sellers were male with a median age of 21 and an household income of $30,000. Another report on virtual goods from Inside Network and the Virtual Goods Summit estimates that virtual goods revenues will hit $1 billion in 2009. The survey was conducted in July.