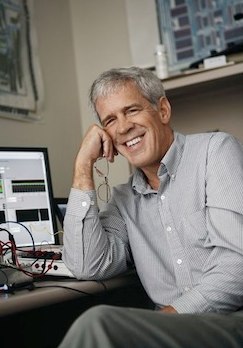 Square, a new company that makes a small device for credit card payments from your mobile phone, has probably stirred up more excitement than any startup launching in recent months.

But Bob Morley, an associate professor of electrical engineering at Washington University, says there’s a big hitch: He built Square’s credit card reading technology and has filed a patent for it, so the San Francisco company doesn’t own a key part of its tech. He came up with the concept, designed it, and assembled the first working prototype for it, he says.

Square has generated buzz not just because it was co-founded by Twitter creator Jack Dorsey. The concept of Square’s small device, which hooks up to your phone’s audio jack and allows anyone to swipe credit cards for payment is pretty audacious. It comes at a time when all kinds of financial and technology companies are seeking to crack the problem of mobile payments, and Square’s idea seems brain-dead obvious in hindsight. Just as we saw in the case of Facebook, there are often more fathers — or at least claimed fathers — to potential success than originally realized.

I emailed Square for comment earlier this afternoon, but haven’t heard back yet. If I do, I’ll update this post, but for now all I have is Morley’s story.

Here’s Morley’s version of what happened. He said he’s been a longtime friend of Square co-founder and chairman Jim McKelvey’s family through Wash U. (McKelvey’s father was on the faculty, and McKelvey himself was an engineering student there.) Morley had been researching magnetic fingerprinting as a way to protect against credit card fraud, so when McKelvey had his well-known “Eureka!” moment of wanting a simple, portable credit card reader for selling his glass art, Morley decided to build a prototype device. (An early prototype is pictured below.) 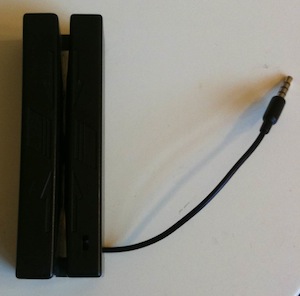 Plenty of others have contributed to the technology, Morley acknowledges — he says he didn’t design the iPhone app that controls the device, and much of the device’s mechanical design comes from McKelvey. But the technology for scanning the card’s magnetic stripe and converting it into an audio signal? Morley says he built that, and filed a patent for it in June. (Patents usually aren’t published until 18 months after filing, but for what it’s worth Morley showed me an email receipt confirming that the patent had been filed.)

Morley planned to assign the patent to Square in exchange for ownership shares in the company, but Morley says the two sides couldn’t come to an agreement, and the negotiations broke off in October. Since then, Square has said they aren’t using Morley’s technology, but he said he’s skeptical that’s actually the case.

So what happens next? Well, Square is free to move forward since the patent hasn’t been granted. Morley says he’d like to return to the negotiating table. If that doesn’t happen Morley says he’s interested in licensing the technology to other companies — which might eventually be trouble for Square.

As noted earlier, an outsider claiming credit for a company’s success is a familiar story, and Square certainly has the potential to become a very big deal — it’s reportedly valued at $40 million already, and it seems to have found a graceful solution to the mobile payments problem. (In comparison, Intuit has, for example, a mobile credit card reader, but you must either enter the credit card number or buy a separate device that’s bulkier than Square’s.)

Morley doesn’t deny that he wants a share of Square’s success.

“There’s no animosity,” he says. “They’ve got a company that they’re moving along, and I hope it does well. I’ve my cards to play: I’ve got my patent application in, and I’m going to see what I can get for it.”