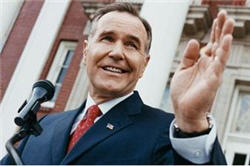 Business analysts, who are paid to dryly evaluate and forecast the financial performance of the companies they cover, turn out to be vulnerable to what one research group has dubbed “charismatic” language in the CEOs’ vision statements.

Certain words and imagery seems to push analysts’ emotional buttons. These analysts then skew their forecasts, misleading investors to believe a company’s earnings potential will be higher than it actually is.

The end result: Carefully wording a CEO’s communications a certain way can boost the stock price of a company. This eventually causes investors to lose money, when quarterly results don’t match the chief executive’s abstract vision or the analysts’ numeric ratings.

The study was carried out by INFORMS, the Institute for Operations Research and the Management Sciences in Hannover, Maryland.

When the study talks about  charsimatic language, it doesn’t mean personal charm. It means using specific patterns and keywords when talking about the company’s past, present and future.

The researchers analyzed the initial letters to analysts sent by new CEOs at 367 companies. They dubbed as charismatic any language in those letters that followed these three patterns:

The study validated two of the researchers’ three scientific hypotheses:

Vilmos Misangyi of Pennsylvania State University, one of the three researchers, explains the concept in this video clip: