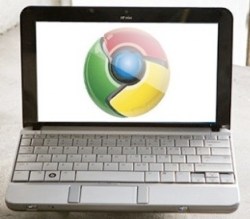 Rumors of a Google-branded PC of some sort have been around for years. In 2006, I blogged a Consumer Electronics Show press conference at which reporters goaded Eric Schmidt: “What about the Google PC?” and, “You’d be stupid not to do it, so you must be doing it, right?”

Schmidt’s deadpan answer: “We issued a statement that we have tremendous partners in the PC space, so we have no interest in doing it.  I guess some people don’t believe it.”

Exactly, Eric. We don’t believe it.

Today, TechCrunch editor Mike Arrington claims to have inside knowledge that Google has talked to at least one netbook maker about building a Google-branded netbook running Google’s Chrome OS operating system.  It would ship a year from now, for the 2010 holiday shopping season. Arrington’s sources claim they’ll likely be sold through wireless carriers, just as smartphones are today, with Google paying a subsidy on each netbook to keep the sale price down.

Now that Google has a Google-branded Nexus One phone coming to market, the likeliness of a Google-branded netbook seems much more real. But notice the difference: The Nexus One is a sort of geek status-phone. It comes without a wireless plan. Getting hooked up can be complicated. The netbooks, if sold with built-in wireless enabled, would be cheaper and easier for mass-market consumers to buy than a standalone computer.

The unidentified netbook maker, Arrington says, was given a detailed set of technical specs by Google representatives. As VentureBeat’s Anthony Ha reported last month, Google is being picky about what hardware it will allow to run Chrome OS, because Google wants only fast Google PCs, not slow ones. Speed is one of Google’s core brand values. A slow PC isn’t a Google PC.