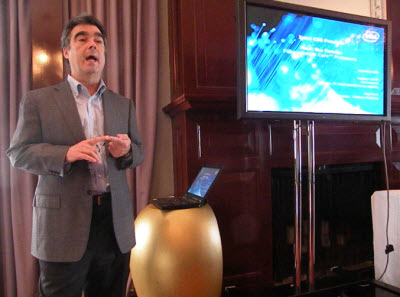 Intel said it is on schedule to deliver new chips for a wave of new desktop and laptop computers that will be announced at the Consumer Electronics Show in January.

Clearly, the economic downturn hasn’t slowed Intel’s push to make cheaper, faster, and more power-efficient chips. Consumers are likely to benefit as new computers hit the market with these new features in January.

The new chips are the first built with Intel’s new 32-nanometer manufacturing process. (This new process can make chips faster, more power efficient, and cheaper than its previous 45-nm process). Stephen Smith (pictured), said this morning that Intel has two factories in volume production of 32-nm chips. Two more factories, each of them capable of churning out millions and millions of chips, will come on line in 2010.

Intel will unveil 17 new microprocessors (plus 10 more chip sets and wireless chips) in January that are based on the 32-nm technology. The product lines include more Core i7 chips, as well as new categories known as Core i5 and Core i3. There are 400 computers that will ship from Intel’s customers in January and beyond. By spring, computers with the chips will be available across entire product lines, from the low end to the high end. That’s a rapid rollout, even for Intel.

Intel introduced its first shipped server chips based on its new chip family (called an architecture, since the design can be used across multiple chip generations), code-named Nehalem, early this year. It introduced mobile and desktop chips based on the Nehalem family early this year. All of these new chips — implemented in a design called  Westmere — will be based on the Nehalem architecture.

Intel is also pushing new Intel Atom chips into netbooks, which are smaller than laptops and are meant to be used for surfing the web. Smith said Intel foresees that the PC market will continue to recover, led by consumer demand and followed by commercial customers. Compared to the dour forecasts of a year ago, Intel says it expects sales in 2009 to show growth in the consumer segment.

Paul Otellini, chief executive of Intel, will give an update on the product introductions at CES in Las Vegas, where he will be giving one of the keynote speeches on Jan. 7. Intel showed demos of how these chips are much faster at doing processing tasks such as editing photos or running games.