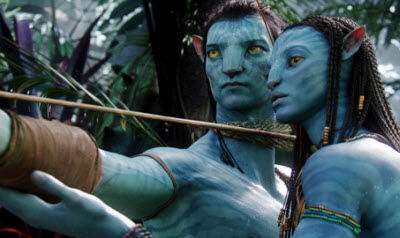 James Cameron’s high profile sci fi movie Avatar, which hits theaters tomorrow, will be accompanied by a ton of accompanying merchandise and spinoff products. And thanks to a small company called Multiverse, two big brands, Coca-Cola and McDonalds, were able to easily create some spinoff web games based on the themes in the film.

Mountain View, Calif.-based Multiverse has built a platform that can be used to pop out one virtual world after another. And both Coca-Cola and McDonalds made use of a new Multiverse technology, dubbed Remix, that takes the digital assets created for a film — such as a computer animated character’s face or body — and automatically turns it into something that can be used in a game.

“To create many assets from a single source of code is one of the Holy Grails of digital entertainment technology,” said Corey Bridges, executive producer and co-founder at Multiverse. 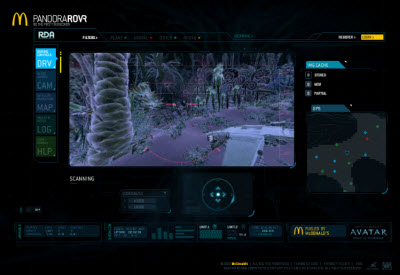 By luck, Multiverse’s founders met Cameron and his producer Jon Landau years ago as they were getting Multiverse off the ground. Cameron and Landau joined the company’s advisory board and they loved the Remix idea so much they introduced Multiverse to the film’s sponsors.

Technologically, Remix has been very hard to make. But Multiverse had a diverse team of game makers and special effects technologists at the company. It takes a 3-D computer model which can be broken down into tens of thousands of shapes, or polygons. It then makes a simplified version of the model that can be set at varying levels of visual fidelity. Normally, it takes whole teams of artists to recreate digital assets for every specific spinoff product, with very little reuse. 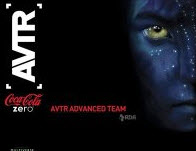 Cameron used his own production company, Lightstorm, and WETA, the New Zealand special effects house that made the animations for Peter Jackson’s Lord of the Rings films. They created the creatures, plants and landscapes of the rainforest planet of Pandora in the film and then provided them to Multiverse.

For Coca-Cola’s Coke Zero brand, Multiverse created a Facebook game called AVTR Advanced Team. In the game, you enlist a couple of Facebook friends and create a squad that lands on Pandora. You explore the area and shoot the creatures that jump out of the jungle to attack you. It’s a simple 2-D game in which you shoot and shoot — like a simple mindless arcade game, built with Adobe Flash. You can also fight another friend in a one-on-one multiplayer match. Multiverse created the game in just a month. 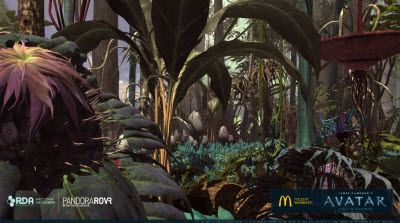 Multiverse also co-created a game called Pandora ROVR for McDonalds’ web site. AKQA, a creative media firm with expertise in user interface design, and Multiverse co-created the game in which you ride in something much like a Mars Rover. You explore Pandora with a unique infrared-like view. But whenever you stop, you can take photos of specimens. That triggers Multiverse to retrieve an animated photo of the object from its servers. It sends the image to the game player, who sees a high-quality picture of the object. The high-quality image is possible only because Multiverse has the original digital assets. This kind of exploration suited McDonald’s, which didn’t want a violent game for young users.

It takes Multiverse about an hour to convert each Avatar 3-D model. It takes eight photos of the 3-D model, then it generates a two-dimensional image, known as a Flash sprite, that can be used in a game. The McDonald’s game is now live in 15 languages. 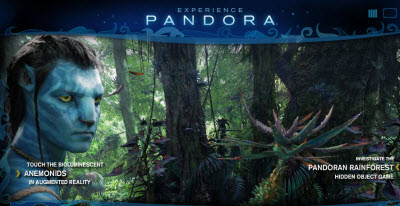 It will be interesting to see if the games prove popular. But the very fact that they used the Multiverse technology, which received a fee for its service rendered, helped save a lot of money.

By contrast, Ubisoft spent an enormous amount of money creating the digital animations for its James Cameron’s Avatar The Game console games. Those games, released on Dec. 1, turned out to be expensive flops. Ubisoft hasn’t said how many of those games it sold (based on what it did for the King Kong movie, it could be a lot of unit sales). But the critics hated the game and gave it an average Metacritic rating (aggregate review score) of 61 out of 100.

Multiverse is still refining the Remix technology. Upon commercial release, it plans to let developers use the platform at no cost. If they start selling something based on the platform, they then have to pay a 10 percent revenue share to Multiverse. So far, Multiverse has 25,000 developers who have produced titles such as Yoovolution and City of Sinners and Saints. Many of Multiverse’s licensees are government agencies that are building virtual worlds for training purposes. But no customers have yet used Remix in a published game. Still, Bridges says there are some unannounced projects.

Multivese was founded in 2005 and has 12 employees. It raised an unspecified amount from angels and is now looking for a second round of funding from venture capitalists. Right now, there are no competitors for Remix, although there are others who are licensing platforms to build virtual worlds such as Forterra.