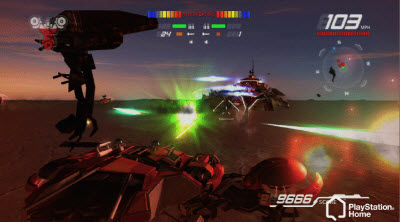 Sony’s PlayStation Home virtual world on the PlayStation 3’s online network has built an audience of 10 million gamers in the past year, largely by providing a social world where players can meet each other via 3-D avatars. They can play light casual games and visit promotional places in the world such as Red Bull’s 3-D spaces.

But the online-connected world of Home, accessible via a PS 3, is about to get a lot more interesting. Today, the company is announcing Sodium One, the first stage of a 3-D game world that marks the beginning of a massively multiplayer online virtual world. It’s kind of like a virtual world within the virtual world of Home. In Sodium One’s action game, Salt Shooter, you can hop in a sci-fi tank and shoot a bunch of enemy vehicles in a 3-D landscape that resembles a sunny Nevada desert. 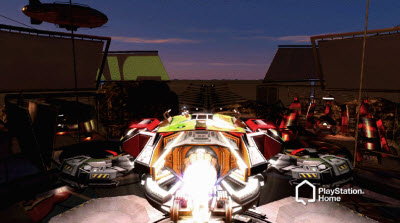 The fidelity of the 3-D art is pretty good, and the action of Salt Shooter is fast. You would never know it was part of something like Home, which features slow 3-D animations, as well as about a hundred casual games that are much simpler than something like Sodium One.

In the Sodium One game — developed by Nottingham, U.K.-based Outso — the more you play and shoot, the more resources you can collect. You can cash those resources in and buy items such as virtual clothing or improvements to your vehicle. You can play five levels of Salt Shooter for free, or you unlock more of the experiences with payments ranging from 99 cents to $4.99. 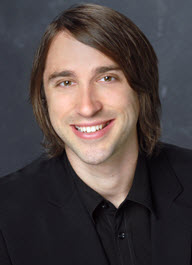 Jack Buser, director of PlayStation Home, says that this is the beginning of a virtual goods business model in Home. Players log in and adopt cyber personas. They create 3-D avatars, or characters, and wander around in a realistically rendered 3-D world which resembles Second Life. Players will be able to enjoy content for free, but they can level up the experience by paying for goods that they have earned in games. They can also buy goods with real money.

“We’ve evolved Home into a true social gaming platform,” Buser said. “We are poised to take a leadership position in social games with Home.”

Of course, Sony has a long way to go. In the past year, it has watched the free-to-play business model unfold on platforms like Facebook. The social network has 350 million users, far exceeding Home’s 10 million, which is a pretty good percentage of the PlayStation 3’s 27 million gamers. Companies such as Zynga have games like FarmVille that have 72 million monthly active users. That is why they can generate huge amounts of revenue with free games based on virtual goods models. 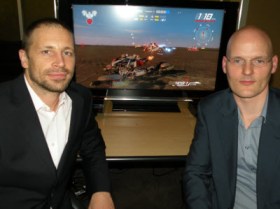 But Sony has taken notice, and has quietly built all of the back-end processing, currency, digital objects, and development infrastructure needed for developers to create virtual goods apps within Home. That is why Outso decided to make Sodium One, said Joel Kemp, chief operating officer at the company (pictured, left).

Outso conceived of the game in March and built it with a team of just 10 people. They leveraged Sony’s development tools and were able to get Sodium up quickly. They can now experiment with the game, which includes some casual activities like stomping on scorpions and serving drinks to friends.

Sodium Two will launch early next year with more multiplayer combat options, said Halli Bjornsson, (pictured, right) chief executive of Lockwood Publishing, which published the Sodium One game developed by Outso. At each step along the way, Outso can now test how gamers react to its game features. Eventually, it will build out a full-scale MMO within Home.

“By doing it step by step, it really reduces the risk,” Bjornsson said. 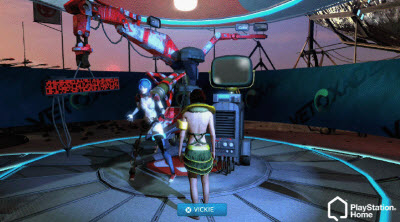 And that MMO is going to be just one of many, Buser said. Meanwhile, Sony is experimenting with virtual goods in the main lobby, or plaza, of Home. There are already 2,000 virtual goods sprinkled throughout Sony’s Home virtual world. Some of them are free, but users have shown they’re willing to pay for some goods to set their avatars apart, Buser said.

Sony is also making money from Home through promotional spaces — 3-D sections of the world created by advertisers such as Red Bull. About 50 3-D spaces have been created so far. Outso has made some of them, including the 3-D space for Sony’s game, Uncharted 2: Among Thieves. One of the most popular spaces is a 3-D Bat Cave that debuted after the launch of the Batman: Arkham Asylum game on the PS 3. These experiences are why the average visit to Home lasts about an hour. So far, Sony has staged 250 community events on the platform.

Sony will keep expanding the virtual content in the broader Home world. But it is also encouraging developers to create 3-D games such as Sodium that can be accessed only from within Home. Buser said that 30 game developers have signed up to do so. The population of the world has been growing fast. In October, it had 8 million registered users — now it has 10 million.