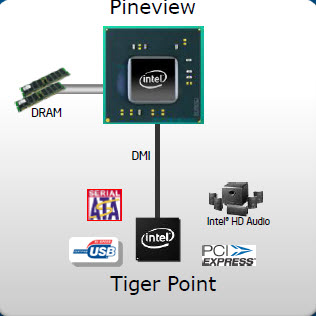 Intel is announcing a new generation of its Atom microprocessor that will make netbooks faster, cheaper, and more power efficient. That could help accelerate the growth of netbooks, which are low-cost machines that are smaller than laptops and are meant for cruising the web.

This N450 Atom processor is cheaper than past solutions because it eliminates a chip from the system. In the past, Intel had three chips in an Atom computer: a processor, a chip set with integrated graphics, and an input-output chip for dealing with printers and other peripherals. Now, Intel is combining the graphics and chip set’s memory controller into the microprocessor itself. The input-output chip remains the same.

For consumers, this means that netbooks won’t be so brain dead anymore. Most netbooks, which have taken off like wildfire in the past couple of years, are under-powered. This new chip will enable netbooks with longer battery lives and faster processing power, said Anil Nanduri, marketing manager at Intel. 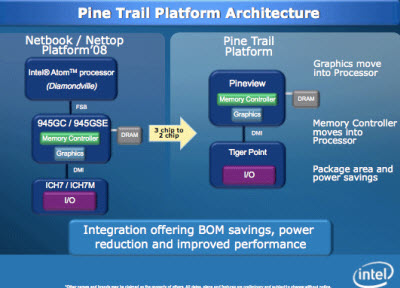 The world’s biggest chip maker could do some real damage to its rivals with this chip combination. Nvidia makes an Ion chip that can be paired with Intel’s older Atom processors. But with graphics combined with the processor in the new Atom, there is no need for an Ion chip. And Advanced Micro Devices is readying its own combination processor-graphics chip, but it won’t be shipping that until 2011.

The N450 operates at 1.66 gigahertz and will be used in netbooks, enabling them to operate with 20 percent lower power consumption, and the total space required for the chip is 60 percent smaller. Intel says that more than 80 netbook designs are underway at customers, which include Asus, Acer, Dell, Toshiba, Fujitsu, Lenovo, Samsung and MSI. Those vendors will show off working machines at the Consumer Electronics Show in Las Vegas next month, and the machines will ship within a matter of weeks.

Intel also has two desktop versions of the Atom processor, the D410 with one built-in processor and the D510, which has two processors on one chip. The desktop chips are 70 percent smaller and 50 percent lower power. All of the chips use Intel’s 45-nanometer manufacturing process. They will run Windows 7 Starter version or Windows 7 Home Basic operating system. The netbooks may also use the Intel-developed Moblin version of the Linux operating system. The N450 chip operates on just seven watts of power.

Since June 2008, Intel has shipped more than 40 million Atom processors for netbooks. That rate of growth is faster than the sales of Nintendo’s popular Wii console.

The new Atom-powered netbook models will likely have screens that are seven inches to 10.2 inches. They’re being used in portable media players, netbooks, small desktops, and more. ABI Research believes that total Atom shipments will surpass 100 million a year by 2011.

This means that Intel isn’t taking its foot off the pedal. And both Nvidia and AMD have to answer with their own solutions, and do it soon.