Franchises. Sequels. Big summer movie games. Despite the glut of those familiar games that crowd retail shelves each year, gamers witnessed a respectable outpouring of original titles in 2009. Developers know that making a new intellectual property isn’t easy, and most publishers won’t take risks on them often. But creators, executives, and gamers all know the reward of making a successful original game is worth the most satisfying endeavor. After all, Call of Duty Modern Warfare 2, Grand Theft Auto IV, even New Super Mario Bros. Wii were all once original games. Here are my picks for the best new original games of 2009. 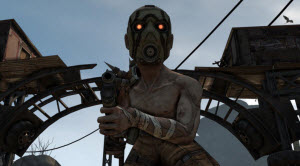 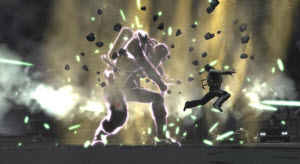 2. Infamous (developer: Sucker Punch, publisher: SCEA, platform: PS3, rating: mature). Imagine what would happen if a freak accident gave you the power to shoot electricity through your hands and jump from 40-story buildings without a scratch? That’s the simple premise behind Sony’s third-person open-world action game. Developer Sucker Punch’s first PS3 title puts you in the shoes of the wildly powerful Cole, who explores the ethical boundaries his new powers, while venturing into an enormous city he can scale, climb, and leap through, and destroy with equal power. You’ll recognize bits of GTA, Crackdown, and hints of Sly Cooper (Sucker Punch’s hit PS2 series) in it, but over the 30-plus hours of game play, you’ll realize Infamous stands on its own. 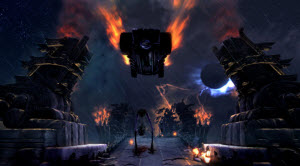 3. Brutal Legend (developer: Double Fine, publisher: EA, platform: PS3, Xbox 360, rating: mature). Despite less than stellar sales numbers, Tim Schafer’s newest creation is an under-valued winner. Like all Schafer games, I played Brutal Legend for the story. The narrative delivers a heartfelt love theme and endearing characters, and Jack Black is superb as Eddie Riggs. But I ended up loving the gameplay equally as much. The RTS battles may be the game’s Achilles Tendon for many (annoying for action games and weak for RTS fans), but I enjoyed the creative chaos of it all. If nothing else, Brutal Legend shows a distinct and creative brilliance that’s absolutely rare in the games today. 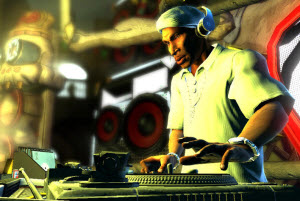 4. DJ Hero (developer: Freestyle Games, publisher: Activision, platform: PS2, PS3, Xbox 360, Wii, rating: teen). Taking its “Hero” franchise into unknown musical territory, Activision tapped Freestyle Games to translate the rhythm-making madness of real-life DJs into a video game. The result is a vibrant, wild DJ title based on a simple premise–mixing music. With a bit of a learning curve, you’ll have to step up and manipulate the turntable, replete with cross fader, effects knob, and euphoria button, but the game provides a solid tutorial and two easy difficulty levels to help. Perhaps more importantly, the game structure doesn’t play like Rock Band or Guitar Hero; it’s all about getting high points and enjoying the music. The jury is still out on whether DJ Hero will ever reach the same sales numbers as Guitar Hero, but the diverse range of original and mixed licensed music, the tough but fun turntable, and the thrilling new musical experience makes DJ Hero a top new IP in 2009. 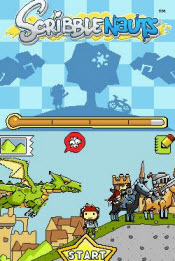 5. Scribblenauts (developer: 5th Cell, publisher: Warner Bros. Interactive, platform: DS, rating: everyone). Imagine a game that solves puzzles by simply typing in words. From 5th Cell, (see our profile) the guys who brought Drawn to Life to the DS, Scribblenauts is a wildly innovative, if occasionally imperfect, exploration in “immersive” gameplay. As Max, you’re challenged by hundreds of obstacles requiring your input (words that you write with the DS stylus) that then transform into a problem-solving object. Type in lizard, alien, whale, wrench, beaver, what have you, and it appears on screen.You can then use that object to get around the problem at hand. There are actually a lot of ways to solve some of the puzzles, if you use your imagination. You can write the word shovel and see the shovel appear. Then you can use your shovel to dig your way through a barrier, for instance, or you can write the word ladder instead and then use it to climb over the barrier. Write the word rope, and then you can climb over the barrier. Scribblenauts is a refreshingly innovative and creative title for all ages that will have you glued to the dual screen for hours. 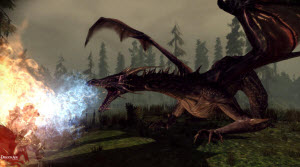 6. Dragon Age: Origins (developer: BioWare, publisher: EA, platform: PC, PS3, Xbox 360, rating: mature). Canadian developer BioWare may not own the Dungeons and Dragons license, but that hasn’t held back the talented studio from making a great new fantasy RPG. Creating a heroic battle between the evil swarming Blight and the good Grey Wardens, BioWare has constructed a deep RPG universe full of lively characters, mature content (i.e. betrayal, sex), and tactical battles. Based upon three races (human, dwarf and elf) and three base classes (warrior, rogue and mage), Origins gives gamers intricately deep character creation tools and background stories with which to venture for 60-plus hours of gaming where every decision you make (deciding whether some one lives or, who you have a relationship with, etc.) has an effect throughout the game. 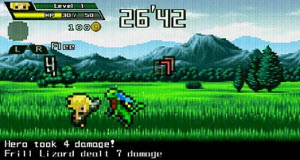 7. Half-Minute Hero (developer: Marvelous Entertainment, publisher: Xseed Games, platform: PSP, rating: Everyone 10+). Half-Minute Hero is a unique take on the role-playing genre, casting aside long, drawn-out adventures and replacing them with quick, funny, and story-filled mini episodes. Nearly everything about Half-Minute Hero plays on or parodies traditional RPGs, from the oversized sprites and 2D play to the self-conscious character dialogue. While the timer ticks down from 30 seconds on a wide-open map, the battles stop the clock and initiate battle. The challenging battles are filled with humor and fun, and each feels like a special homage to classic 2D J-RPGs. This is a great game concept smartly executed and perfectly designed for handheld gamers. 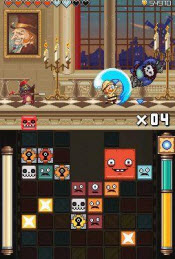 8. Henry Hatsworth in the Puzzling Adventure (developer: EA Tiburon, publisher: EA, platform: DS, rating: everyone). Who would have thought that football game designers could do something like this game. Developed by the guys who bring you Madden every year, Henry Hatsworth is not only a big change of pace for them, it’s a genre-blending Nintendo DS game that successfully straddles the line between hardcore and casual gamers, making it something new for DS owners. Hatsworth creates a fascinating yet successful smorgasbord of classic platforming skills and Tetris-style puzzles, and does so with style. While your hero, Henry, is a funny, likeable character who is half oddball/old guy and half-cocked adventurer, he is put into hilarious situations and surrounded by equally quirky enemies. Dressed in gear for the deep jungle, Henry is the No. 1 member of the Pompous Adventurer’s Club. This is a great title for new players (for the first handful of levels) and hardcore players (toward the end of the game) who want a real challenge. The game has five worlds, 30 different levels, a variety of opponents, and a bunch of bosses to overcome. 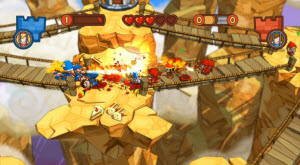 9. Fat Princess (developer: Titan Studios, publisher: Sony Computer Entertainment America, platform: PS3, rating: teen). Through and through, Titan Studios has delivered a stylistic, funny, and wicked, yes, wicked multiplayer PSN game with Fat Princess. With the simple goal of rescuing your kidnapped princess from the enemy castle (while your enemy does the same), this little DLC multiplayer game is both tough and fun. It’s tough because finding the right group of folks (i.e. skilled played) can be daunting. And fun because once located, working with a skilled group makes every aspect of the game shine. It’s hilarious, cute yet gory, and it’s a real gem. 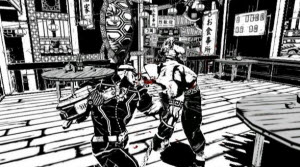 10. MadWorld (developer: Platinum Games, publisher: Sega, platform: Wii, rating: mature). MadWorld’s ultra-violent action is strikingly different game from the hordes of Wii Sports rip-offs and mini-game knockoffs that have blasted Wii owners into numb submission over the last three years. MadWorld’s distinct visual style perfectly complements its action-combat content. With black and white characters and backgrounds soaked in red sheets of blood in every confrontation, the game is an initial shock to the senses. Over time, the gameplay and short list of tactics show its lack of depth, but Platinum Games’ hit demonstrates the power of mature content, style, and simplicity on a system lacking them.

**Extra Bonus** (This game is based on a license, but within that limitation, it was one of the most original games we’ve seen in a superhero genre). 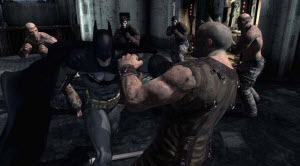 Batman: Arkham Asylum (developer: Rocksteady Studios, publisher: Eidos, platform: PC, PS3, Xbox 360, rating: mature). The Batman series began in Detective Comics #27 in May 1939. So yes, it’s as old as the wind. But Rocksteady’s reinvention of Batman in video game form is equal to Frank Miller’s re-envisioning of the Batman in The Dark Knight Returns. The superbly handled cacophony of genres–action, adventure, stealth, even a touch of RPG–fits the character perfectly, and the game is backed by a superbly written story, top-flight graphics, and crème of the crop voice talent. Few studios have handled so much baggage, so many cooks in the kitchen, and such an old IP with such imagination and skilled execution. The brilliance of Batman: Arkham Asylum–and the reason it’s listed here–is that it feels like a brand new intellectual property, even though it isn’t.