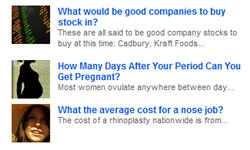 Indiana-based question-and-answer startup ChaCha announced today that it’s received $7 million in new funding. The company was founded in 2006 as a cross between Ask.com and the Mechanical Turk: Users would ask a question, and they’d be connected to another human being who would provide an answer in a real-time chat session. In short, it didn’t work out.

In early 2008, ChaCha ditched that business and reinvented itself as a question-and-answer service for mobile phone users. Text ChaCha a question, and it’ll text you an answer. The company ran a promotional campaign to provide election-year research that fall.

You can use ChaCha from a desktop, too, but its business focus is on text messages. That’s a service not offered by presumed competitors Mahalo Answers and Answerly.

The company claims substantial funding for its efforts. In January of this year, it announced $30 million from unnamed investors. And the $7 million it announced today, from anonymous lenders, brings the company’s total funding to $69 million.

That’s a hefty pile of loans for a startup. What I’m hoping the company will get back to me on is: How will they make money? The company sells ads served with its answers. Does that bring in enough revenue to make what seems like a labor-intensive business profitable? Is there some tech trickery that automates the answers?

And since when do late-stage investors in a startup — ChaCha has already gone through rounds A, B, C and D — not want everyone to know about the smart investment they’re making? For seed funding it’s typical to be coy, but not so much closer to a hopeful IPO or acquisition.

I couldn’t find a designated press contact, so I texted my questions to ChaCha’s SMS address, 242242. I’ll update here if they write back. Sorry, I couldn’t resist.

(Update: ChaCha sent this reply to my BlackBerry: “Thanks for you Q, we are experiencing temporary network problems. Please try again later!”)

Update #2: A ChaCha spokesman emailed me. They won’t disclose the investors, but here’s their case for their business model and funding: “In less than two years, ChaCha has answered over 300 million questions mostly from teens and young adults (up 191% this year alone). ChaCha’s mobile text service is second only to Twitter in growth rate of the Top 5 mobile text publishers. This past quarter ChaCha passed Google as the biggest source of SMS text search queries. Between its site (which Quantcast, says is the fastest-growing website in 2009, among its top 100) and mobile platform, ChaCha reaches over 14 million users every month.” If all that’s true, then ChaCha’s biggest hurdle may be getting the grownups to realize it exists.