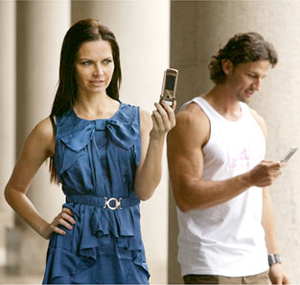 More than half of members using mobile and location-based dating service Skout have met up with someone they have contacted via the iPhone app in real life. And even more would be interested in doing so, according to a new report released by the San Francisco-based company.

The idea behind Skout is to turn people’s phones into tools for meeting other singles in their local areas. What was unclear before was whether these virtual connections resulted in offline liaisons. According to data collected from a survey of 1,000 Skout members between ages 20 and 30, this appears to be happening more than one would suspect.

Also clear, the holidays are lending a sense of urgency to online dating. A series of questions on the survey gauged interest in hookups during this time of year. Surprisingly, 29 percent of the surveyed Skout users said they would prefer spending time with family if they had to choose between that and finding love. So, essentially 70 percent of people would rather date someone they just met online than hang out with their family. Whether this says more about how people feel about their families than dating, I don’t know.

That said, about 36 percent said they’d like to go out on a few dates during the season; 20 percent are looking to hook up before the holidays are over; and 15 percent would like to make the magic happen several times before the New Year’s glitter settles.

Also interesting, even some users who admitted to be dating someone already said they are looking to get frisky with someone else this year. About half of these users haven’t told their partners they are still using Skout, while the other half are doing so with their partners’ knowledge.

All of these results might be a tad skewed for Skout users. Because the service allows people to chat and share photos and comments with other singles who are physically nearby — in the same restaurant or around the corner, perhaps — it logically attracts more people who would be interested in interacting in real life.

Among the survey’s other findings: 40 percent of people are using Skout while out on the town at bars and clubs, and 35 percent are using it at work — presumably to find people closeby who might be interested in dating or hooking up.

Location-based mobile dating is still a relatively new concept. Skout launched at the beginning of this year, the first company to emphasize dating, distinguishing it from location-based social-networking apps like Loopt and Brightkite. It will be interesting to see if its survey data changes as the technology becomes more commonplace.

Skout won the DEMOgod award at this year’s DEMO Spring conference back in March. Today, it reports 450,000 users total, with 80,000 members on its gay-focused web property BoyAhoy (a clever name… although we still think an opportunity was missed for “BoySkouts”).