If your family is anything like mine, your holiday traditions include a moment when the presents are unwrapped, the Tofurky (hey, it’s my family) is eaten, and everyone drives to the theater to a catch a movie. But how will you decide what to watch?

Well, if you want to see which movies the masses are talking up on Twitter, or what your friends are recommending, you should check out a new site called FlixUp. The team is putting the final touches on the site, and it should go live either tonight or tomorrow morning. (I’ll update the post once it’s available.)

Bazaar Labs, the San Francisco startup that created FlixUp, started out by releasing an iPhone app earlier this month. The company compares its website and app to Rotten Tomatoes, the site that aggregates (mostly professional) movie reviews. There are other review aggregators out there (I’m a big fan of Metacritic), and those sites often include a place for users to post their own reviews. What’s missing however, is a site that measures the general population, or at least a sizable subset, not just select critics.

That’s where FlixUp comes in — it pulls in movie-related comments from Twitter, then calculates both how “hot” a movie is (basically, how many people are tweeting about it) and whether those comments are positive or negative. For example, I see there’s a thermometer showing that the movie Avatar is getting the most buzz right now. The thermometer is green and is adorned with a happy face, so I know that most of the comments are positive. Meanwhile, New Moon comes in second when it comes to buzz, but the thermometer is yellow, so the comments are more mixed.

You can also bring up the actual tweets about each movie. Of course, you could do this via a search within Twitter itself, but FlixUp says it uses an algorithm called the “Twitter Noise Assassin” to focus on higher quality, useful comments. And you can limit yourself to what your friends are saying about the movie, which strikes me as particularly useful. I’m usually curious about what people I know think about new movies, but if I’m not checking Twitter right after they make a comment, there’s a good chance I’ll never see it. You can also post your own comments to Twitter directly from FlixUp.

The website doesn’t really offer a ton of new features compared to the mobile app, but it’s important nonetheless, since it makes the app available to non-iPhone users. Bazaar Labs plans to add more social data soon, like updates from Facebook and MySpace. It also plans to release apps for topics other than movies. 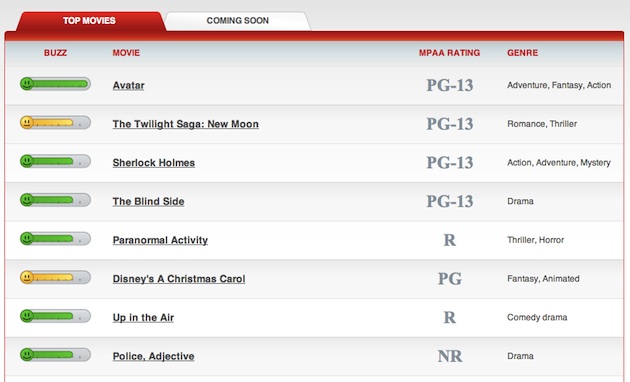 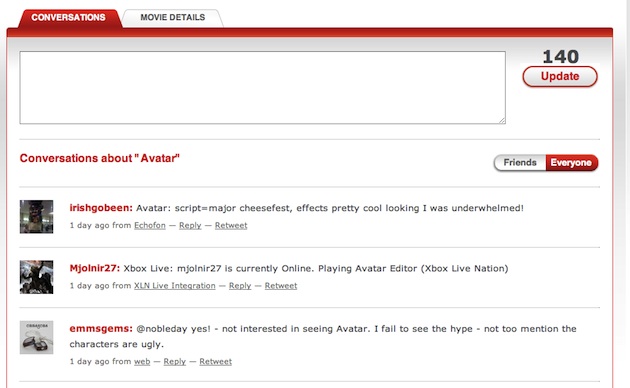