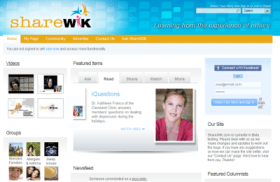 A young San Francisco startup, Grou.ps, has launched tools to let content publishers customization discussion groups. The tools, called Elastic Modules, give publishers a lot of control over how discussion groups look and work on their sites. They can add wikis, calendars and status updates to the same page that hosts discussion threads, giving participants a way to collectively memorize important information and dates.

Their announcement comes just a week after I covered a similar launch by another startup, Grouply. Grouply’s makeover tools for discussion groups are designed to drag 1990s-era forums into the social media age without forcing veteran members to give up their old interfaces.

The core idea behind Grou.ps and Grouply is that nowadays, a discussion group is just one part of a larger set of communications channels around a specific topic, rather than being the sole forum. Yet discussion groups such as Yahoo’s Coaching Hoops, where basketball coaches around the world trade tales of how to train players, often go much deeper and talk much longer on any one issue than Twitter, Facebook, or comments would ever get.

For people who feel all tweets are starting to seem the same, or who are wondering how to continue the Great Online Class Reunion prompted by Facebook, groups could be just what they don’t yet realize they’re looking for.

Grou.ps is a 10-person startup founded in mid-2008 with angel money followed by a round of $1.1 million from Golden Horn Ventures, which added another $1 million this year.