(Editor’s Note: The Start-up Chronicles is a weekly feature giving an inside view of the trials of a bootstrapped start-up – The Cost Savings Guy. CEO and founder Bruce Judson is also the author of “Go It Alone!: The Secret to Building A Successful Business on Your Own” and a senior faculty fellow at the Yale School of Management.)

As a direct marketer, I am a strong believer in experiments – even when I expect them to fail. 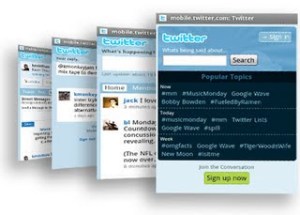 The ideal test is small, involving limited time or resources, and providing an indication of whether I should invest further time and energy.  It is, in some ways, an iterative process, where each piece of learning leads me to effectively increase my commitment to a specific strategy – or lets me know that my time is better spent elsewhere. Ultimately, there’s no substitute for first-hand experience.

I bring this up because I’ve started using Twitter lately. This is a service that never appealed to me.  It always seemed it was primarily a way to monitor what others are saying about your company online. And while that’s valuable, it’s possible to monitor this activity without participating in the service itself.

In connection with the rollout of The Cost Savings Guy, I did not believe that Twitter would prove to be a significant source of valuable traffic. But, not knowing this definitively, I decided to set-up an account and make a small effort (15 minutes a day) to build a following and join the conversation.

As part of this test, I also read several articles and skimmed one book by self-described Twitter gurus. Ultimately, I found most of this advice to be valueless or simply wrong.

My initial reaction was that Twitter was not a place for conversation, but the world’s largest souk, with millions of people proclaiming their wares. I decided to push forward, though (certain that this would simply confirm my initial lack of interest.)

I started identifying people with interests in small business and entrepreneurship, following them, and offering my own Tweets. I also attempted to engage in several conversations. My results were, as expected, uninspiring.

A few weeks later, we started developing our next phase of The Cost Savings Guy, which will involve implementing some innovative ideas geared toward creating a paperless office. (Note, the design of this effort reflects the learning described in earlier columns on inertia and sales hurdles).

This effort led me to think about Twitter again.  I wondered if I could use the service to start building an audience that would be receptive to what we were planning.  In this second round of tests I started identifying people with an “eco” or “green” interest. At the same time, I moved from random “Tweets” to a clearly defined series: 100 services that save money and help the planet. Each day I added a new service to the list and each Tweet had the same format which began “#(insert number) of 100 services that save money and help the planet.”

After a few days, this more focused effort starting to lead to encouraging results. My followers count started to increase by 10 percent or more per day. So, while my total is still relatively small (about 450 followers as I type this) it was at 400 or so yesterday and 360 the day before that.

More significantly, an average of 14 people clicked on my messages when I had roughly 350 followers.  There was some re-tweeting of one of the messages, but I still view this as effectively a 4 percent click-through rate in relation to my number of followers. And as we all know, a 4 percent click-through rate on anything is a real success – and this is a free medium.

These highly preliminary results – even though the numbers are very small, may be meaningless, and I don’t know enough about the value of these visitors – lead me to a few initial conclusions:

First, my mantra that it’s worth testing initiatives you are certain will not work, provided you can do it with very limited resources, remains worth keeping. There may be something valuable here.

Second, both the evidence and logic suggest that the more targeted your interest group, the more likely you are to engage with the right Twitter audience.

Third (and probably most significantly), my numbered list strategy seemed to be a valuable means of demonstrating authority and expertise that allowed me to engage Twitter users. I had something of real value to these users, and communicated it appropriately.

Per my experiment strategy, it’s clear that these results warrant a jump in my efforts in the Twitter arena. Here are the next questions:  If I grow this group of followers, or groups of followers with other interests, will these same results hold and improve? And will this growth come easily? My models from other media (which may or may not apply to Twitter) suggest that with 10,000 targeted followers, an optimized effort, and minimal Tweeting, I should generate 500-1000 click-throughs a day.

In addition, the marketing value of the vocal Twitter audience could also be high.  If users coming from Twitter have a good experience, will they Tweet about it? This needs to be tested as well.

I’ve said before that what really matters is actual experience. Today, I believe even more strongly in this guiding principle.