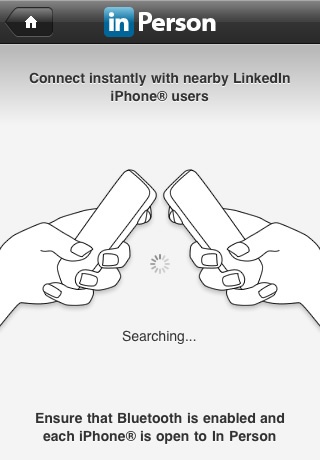 There’s a nice little feature addition to LinkedIn’s just updated iPhone app. Building on iPhone 3.0 OS’s expanded support for Bluetooth, you can connect or exchange contact details with others in person if your phones are close together.

On the outside, it seems quite similar to what Bump Technologies demoed when the startup initially showed off its product nine months ago. In Bump’s version, if you “bumped” two phones (or held them side by side), you could share e-mail addresses or phone numbers. It was a natural next-generation version of the old business card, so others were bound to copy it.

Under the hood, LinkedIn’s version is a bit different. It works over Bluetooth and is implemented over Apple’s GameKit, so it doesn’t require you to physically hold devices as close or touch them together.

Anticipating this, Sequoia-backed Bump is trying to avoid commodification — it’s launched an application programming interface this month to support all types of physical phone-to-phone interaction so that you could, for example, bump to exchange virtual gifts. Another goofy idea was to create a Bump Kevin Bacon, so you can see how many degrees of separation are between you and the actor. Bump also has a rough solution for Facebook friending and cross-platform support, so you can bump an Android phone against an iPhone.