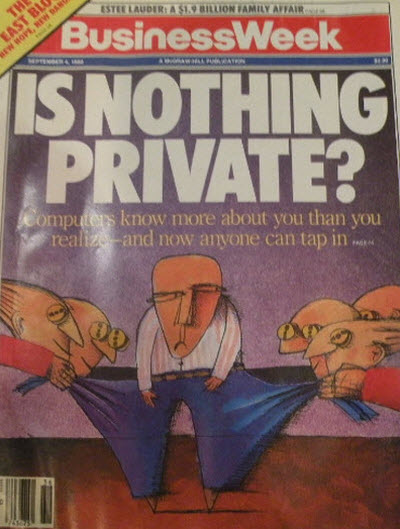 The Netherlands will use full body scanners in screening airline passengers as a result of the lapse in security that allowed a would-be terrorist bomber on board a jet from Amsterdam on Christmas Day. The scanners will allow security personnel to see through people’s clothes and will amount to what privacy advocates are calling a “digital strip search.”

As I make my own flight plans for the Consumer Electronics Show, I’m not looking forward to this trend migrating to the U.S. (I knew I’d be able to reuse the cover image from a 1989 Business Week cover lamenting the loss of privacy that I referenced in a story earlier today — but I didn’t know it would be so soon.)

The full-body scanners have been used on a voluntary basis in test markets in Europe and the U.S. They can highlight hidden cash, drugs or weapons under someone’s clothes. But they can also show whether you’ve got breast implants and provide images of what your body really looks like under your clothes.

The machines cost about $150,000. The steep price and the privacy concerns have held off widespread deployment of the machines. And some security experts say they’re also not as useful as a good, old-fashioned strip search. The Dutch authorities can, of course, blame this all on Umar Farouk Abdulmutallab, a 23-year-old Nigerian man who tried to blow up a bomb hidden inside his underwear on a Northwest Airlines flight from Amsterdam’s Schiphol Airport on Christmas Day. 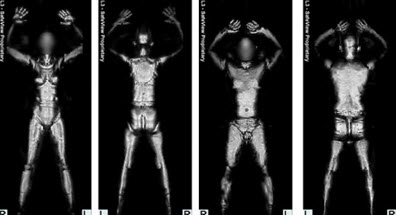 In the U.S., the Transportation Safety Authority says it has 40 scanners at 19 airports and has ordered some 150 more. The scanners are made by Rapiscan System, a division of OSI Systems in Hawthorne, Calif. Right now, the TSA blurs images of passengers’ faces, and operators are stationed far from the passengers. The scanners do not store any data and so can’t keep a record of a person’s image. I think this is a case of an invasive technology that’s going to drive a deep wedge between people. Is it the answer?

Please take our poll about whether you think these scanners are a good idea or not.