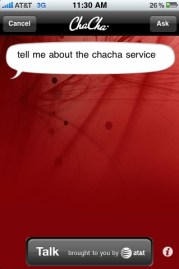 For most of 2009, SMS-based, human-powered question-and-answer service ChaCha has made surprising leaps up Nielsen Mobile’s rating of mobile search services.

ChaCha, which uses inexpensive freelancers to answer questions texted to it at 242242, has been the fastest-growing mobile search service all year, according to Nielsen. ChaCha shot from 7 percent market share to 28 percent in 90 days in the first half of 2009.

On Monday, the company will announce that Nielsen Mobile now ranks them as the No. 1 most-trafficked mobile text service, ahead of Google.

“When ChaCha’s mobile service launched in January 2008,” says Monday’s press release that ChaCha’s publicist shared with VentureBeat, “Google SMS had nearly 100% of the mobile text search market, but ChaCha now has more text traffic, which is coming from users predominantly under the age of 25.” Nielsen’s analysis says ChaCha passed Google sometime in Q3 of 2009. TechCrunch editor Mike Arrington broke the big news in passing in the middle of a post about ChaCha’s financials earlier today.

“I think the more interesting bit of news from a business perspective,” CEO Scott Jones emailed me, “is that we are shaping up to be the #1 way for advertisers to reach teens and young adults.” Jones says ChaCha is about to cross the million-answers-per-day threshold.

I wrote about ChaCha last week when the company announced $7 million in new funding. The company, founded in 2006, had redefined itself in 2008 away from Web chats and onto SMS to provide answers to customers’ questions. By doing everything in short text blasts from near-volunteers, who make anywhere from a few cents to a few dollars per hour for their work, Jones told TechCrunch that they’ll soon be spending less than a penny per answer.

P.S. A clarification: TechCrunch’s headline (“ChaCha Makes its Crazy Business Model Profitable”) might lead you to think ChaCha is profitable as a company. To be clear, Jones said they are profitable on each search. As for the overall operation, Arrington estimated: “Their current revenue run rate is $9 million or so. My guess is they need to roughly double that to become profitable as a business and support their 60 or so full-time employees.” 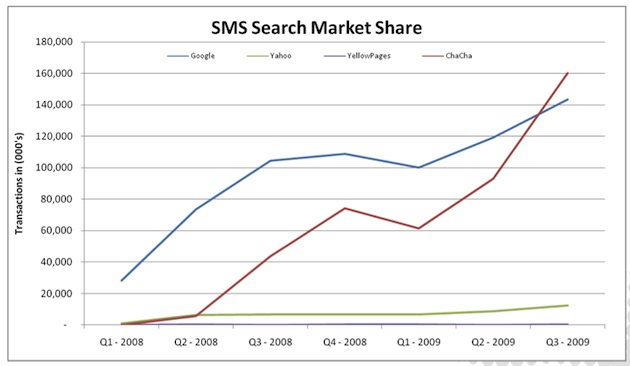