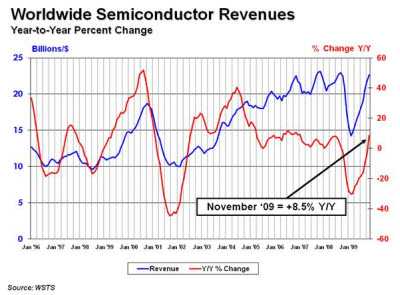 Worldwide semiconductor revenues grew in November, with sales up 3.7 percent from October and 8.5 percent from a year ago, according to the chip industry trade group.

The latter improvement was a rare increase from year-ago numbers, the Semiconductor Industry Association reported. But it’s to be expected since we are now getting into comparisons to year-ago months when the recession was taking hold. Sales in November were $22.6 billion, compared to $21.8 billion in October and $20.9 billion in November, 2008. It was the ninth month in a row of consecutive sales increases, with sales growing in all regions.

The sales are a good leading indicator, since chips are used in all things electronic. Overall sales for the first 11 months of the year were $202.1 billion, down 13.2 percent from year-ago figures of $232.7 billion. The monthly numbers are a three-month moving average of global sales.

“2009 ended with sales of many information technology and consumer products faring better than earlier projections,” said George Scalise, president of the SIA. “Sales of personal computers continue to strengthen in line with recent projections and appear to signal the beginning of recovery of demand from the business sector.”

Scalise said the release of Microsoft’s Windows 7 operating system in October has been a positive factor. Unit sales of cell phones should come in roughly even with 2008 levels. In the consumer space, bright spots include LCD TVs, which saw unit sales grow 25 – 30 percent in 2009.