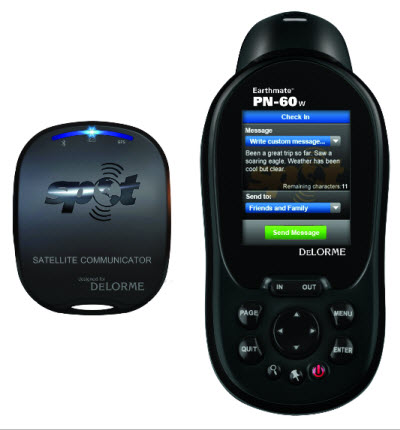 Navigation systems were once products unto themselves. Now they’re just melting into other products. One example: mapping and GPS technology company DeLorme and Spot, a subsidiary of satellite communications firm Globalstar, are announcing today that they have created a global positioning system (GPS) navigation device that is combined with a satellite communicator.

This sort of device is useful for world travelers, hikers, and others working in the wild and out of the range of cell phones. Known as the DeLorme Earthmate PN-60w with SPOT Satellite Communicator, the rugged handheld device can send text messages or contact emergency services when the user is far beyond the normal range of a phone. Users can share their locations via social networking functions and fix their precise locations as needed for SOS purposes.

This is one more gadget making its debut at the Consumer Electronics Show in Las Vegas this week. It will be available in the spring of 2010. Cost is still to be determined. But it’s interesting that hybrid devices like this one are becoming easier to make. Hopefully, I’ll be so awash in communications at the show that I won’t need one of these. But I suppose a blogger should never get caught without the ability to communicate.

Spot’s competition includes Inmarsat, Iridium Satellite, SkyTerra Communicaitons and Orbcomm. The parent company Globalstar was founded in 1994 and was restructured in 2004. It went public in 2006 and in the summer did a debt financing of $738 million.