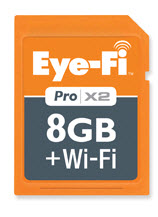 Eye-Fi is unveiling its new generation of photo memory cards that can automatically upload photos to web sites directly from digital cameras.

It is also launching Eye-Fi Center, a desktop application that lets you send photos and videos to multiple locations easily. And it is announcing a feature called Endless Memory, which automatically makes space available on an Eye-Fi card once photos are safely uploaded.

The Eye-Fi Pro X2 memory cards contain a chip called Arcturus. The eight-gigabyte cards can upload via 802.11n Wi-Fi networks, which are faster and have a wider range than older Wi-Fi networks. There are more than 10,000 hot spots across the U.S. where Eye-Fi cards can automatically upload. The cards are available for pre-order today at $149.99 on Amazon and other online retailers.

The Mountain View, Calif.-based company was founded in 2005, and its investors include LMS Capital, Opus Capital, Shasta Ventures and Translink Capital. It has raised $17.5 million to date and has 30 employees. Eye-Fi has steadily introduced new products and services, such as the ability to upload pictures and video directly to sites like Flickr or YouTube. It usage has tripled compared to a year ago.