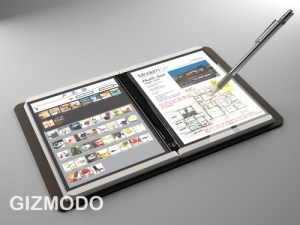 The New York Times reports — with no hedging words like “allegedly” — that Microsoft CEO Steve Ballmer will unveil an HP/Windows tablet computer during his keynote speech formally kicking off the 2010 Consumer Electronics Show in Las Vegas.

If there were a perfect time to beat Apple to the punch with a tablet, Ballmer’s keynote would be it. Thousands of gadget hounds and tech reporters will be in the room, many of them posting text and photos live from the keynote.

The photo above, published in September on Gizmodo, was said at the time to be a Microsoft mockup for a tablet product.

New York Times reporter Ashlee Vance wrote today, “My sources say that Mr. Ballmer will show the as yet unnamed HP device. The product will be touted as a multi-media whiz with e-reader and multi-touch functions.”