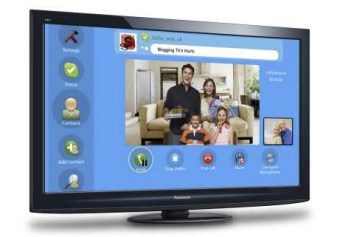 LG and Panasonic will be adding Skype service to their internet-connected high-definition TVs, the popular web-telephone company announced today. The television companies are set to debut their new models on Wednesday, the day before the Consumer Electronics Show kicks off in Las Vegas.

Skype-to-Skype voice and video calls will be free, while video calls will require a webcam that is specially designed for the new televisions, with a price tag between $100 to $200. The webcam lets multiple users take part in a video conference and will be flexible enough to work in a living room setting, where the distance between the TV and user may vary. Embedded webcams, along with built-in WiFi and microphones, will likely become standard features if the new service strikes a chord with consumers.

Already, Skype claims that 30 percent of its calls include video, with the figure jumping to 50 percent during the holidays. Making the move to television is clearly intended to leverage this trend, while also catching the upcoming wave of internet-enabled TVs. As Skype’s CEO Josh Silverman put it, “TVs will no longer be just the center of people’s entertainment experience, but have the potential to be the center of people’s communications experience.”

In a related move, Skype announced that it will upgrade the resolution of video calls to accommodate 720p HD, enabling high-definition video conferencing for both personal computers and televisions. High-definition webcams certified for use with Skype will also be unveiled this year at CES.

Top quality video conferencing has become much more popular in the business world in the last year, with so-called telepresence services provided by big players like Cisco, Polycom, and others. Skype, already perceived to be the cheap and easy alternative to these offerings, now seems poised to bring high-def conferencing into the mainstream.