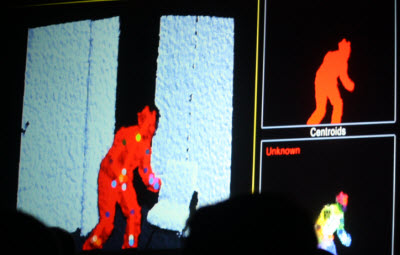 Microsoft confirmed today that it plans to ship Project Natal, a new add-on for the Xbox 360 where you can control a game with your own body motions rather than a controller, in the fall of 2010.

Lots of companies are working on Natal-based games, but neither Ballmer nor Robbie Bach, head of Microsoft’s Entertainment & Devices division, talked about any of those games in the works. With Natal, players will be able to control a game with body movements, since a webcam atop a TV can capture the movements and translate them into controls for the Xbox 360. Natal will be able to recognize faces of players, receive images of objects scanned into it via the webcam, and discern the different voices of players in the room.

Bach played a video at the CES show today about the genesis of Natal in Microsoft Research. (An image from it showing body tracking is shown above). Unfortunately, he didn’t give us a live demo of Natal in action, but that’s because CES isn’t really a gaming show.