A day-by-day comparison of online retail spending showed that in 2009, Dec. 15 was the heaviest spending day of both the year, and of all time, at $913 million, up 21 percent from the corresponding day in 2008. This may come as surprise to retailers, who heavily promote deals on Cyber Monday, the Monday after Thanksgiving and on “Green Monday,” the Monday with at least 10 days prior to Christmas. In 2009, Cyber Monday was the second heaviest spending day of the season, at $887 million, up 5 percent from 2008. 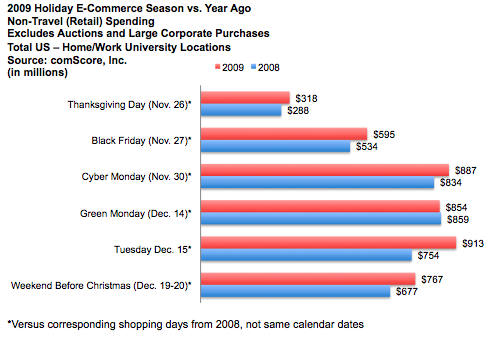 “It’s possible that this better-than-expected end-of-year performance is a harbinger of renewed vigor and optimism for 2010 as the consumer economy seeks to rebound from one of the worst years in memory,” ComScore chairmain Gian Fulgoni stated in a release. “At the same time, we need to remember that consumers’ spending power remains constrained by high unemployment levels, substantial debt and a new-found desire to save.”

This new-found desire to save did not prevent consumers from spending on non-necessities like jewelry and watches, however — the comScore report showed that spending in this category was up 20 percent in 2009 over 2008, when the effects of the recession were just beginning to be felt and sales dropped 29 percent. Consumer electronics spending was up 15 percent over 2008, fueled by iPhones, iPod Touches, flat panel TVs and e-readers. Other categories that performed strongly were event tickets (up 8 percent), computer hardware (up 7 percent) and books and magazines (up 6 percent).

It makes sense that online spending was up in this recession, as consumers seek to save money by shopping online. In addition, more consumers have mobile devices that will help them find better online deals while out shopping. In-store sales are expected to show a more modest gain of 1-2% this year, which again supports the imperative for retailers to build mobile-friendly web sites as mobile users increasingly look for deals on the go.