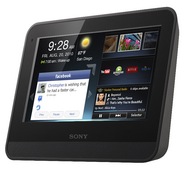 Sony is planning to release a new device called the Dash, which it describes as a “personal Internet viewer.”

Hmmm, an “Internet viewer.” Sounds kind of like a computer. Or my iPhone. Sony is building this product for more casual use, when you just want to check something quickly without turning on and browsing your computer — for example if you want to check the weather, the latest headline, or your calendar.

The apps turn the Dash into much more than a digital picture frame. The Dash might also be compared to a tablet computer, but portability doesn’t seem to be a priority, since you need to plug it in and have access to a WiFi (as opposed to mobile) network.

Sony announced the Dash today at the Consumer Electronics Show in Las Vegas, and said it plans to make the device available in April for $199.