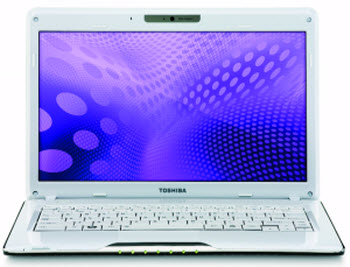 Toshiba grew its market share in the U.S. laptop market in 2009. The Japanese computer maker plans to hold onto those gains with a new family of laptops being launched at the Consumer Electronics Show this week in Las Vegas.

The laptops come in several types. The ultrathin Toshiba Satellite T100 series has a T115 model with an 11.6-inch screen and a T135 model (pictured) with a 13.3-inch screen. They use Intel’s CLV processors and get nine hours of battery life. They come with a sensor that shuts down the hard drive if the machine is dropped. They also have HDMI (high definition multimedia interface) ports, and you can charge universal serial bus (USB) devices with it even if the machine is in sleep mode. The T115 costs $449 and the T135 costs $499. Both machines are under four pounds. Toshiba plans to use AMD Neo processors in its ultrathin line starting in the first quarter.

Toshiba’s L series laptops are more expensive, premium machines, with screens that are 15.6 inches or 17 inches. The M series and the P series will have more of an entertainment focus. Toshiba launched its newest Qosmio gamer laptop in the fall. That machine has an 18.4-inch display and costs $1,449. It will be refreshed in the first quarter with a new Nvidia graphics chip.

The laptops have a lot of the standard new Intel chips that any manufacturer can use. But they also have some software features that set them apart.

One of them is the Toshiba Media Controller, which lets you do easy home networking. It lets you move your media from one computer on a network to another, tapping into new features of Windows 7 Premium edition. With it, you can play content from one machine on another. Another new software feature is Bulletin, a kind of virtual bulletin board you can use to do projects or organize daily tasks. It’s like a place to hang virtual sticky notes. It will be on touch-enabled Windows 7 machines in the first quarter.

Another feature is Toshiba ReelTime. This lets you see a timeline of your backups related to a single file. You can go back in time and filter out photos, documents or videos. 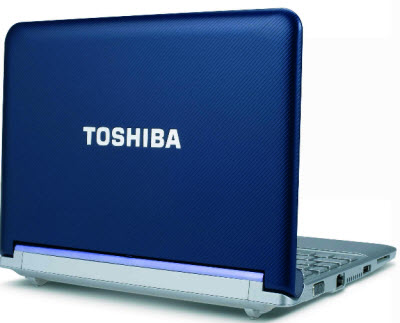 Toshiba also announced yesterday its Toshiba Mini NB 305 netbook (pictured), a second-generation machine that is smaller than a laptop and is meant for surfing the web. Toshiba was slow to join the netbook parade started by Asus. Toshiba’s first netbook shipped in the third quarter, and the business is still less than 10 percent of the company’s revenues. The new netbook has a 10.1-inch screen and a full-sized keyboard. The best thing about it is the 11 hour battery life, up from nine hours for the earlier model, based on the MobileMark 07 benchmark.