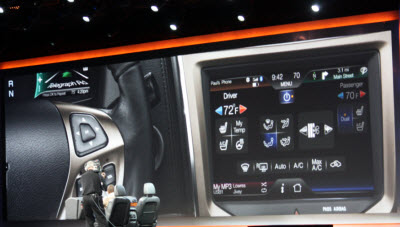 After a couple of years on the market, Ford says its Sync car voice control technology has been a smash hit. Now the car company will use the system to add Wi-Fi and apps to your car.

Thanks to the new additions, you’ll be able to get everything from Mapquest driving directions to Twitter to Pandora Internet radio in your car.

Alan Mulally, chief executive of the American car maker, said in his keynote speech at the Consumer Electronics Show that the Sync technology has been critical in the sale of Ford vehicles. In surveys, 32 percent of buyers said that Sync was important or critical in their decisions to buy a Ford vehicle. Ford hit its target of selling a million vehicles with Sync last May, Mulally said. About 81 percent of customers are satisfied with Sync and 77 percent would recommend it. Sync is a $395 option on many vehicles and is now sold on 70 percent of Ford’s new vehicle sales.

One of the key areas where Sync pays off, and where Ford is investing more research, is in minimizing driver distraction. In Ford’s Virttrex driving simulation center, drivers take tests on driving in Ford vehicles. With Sync, they can select a song on an iPod in 4.9 seconds and their eyes never leave the road. Changing a song on a handheld device can take 30.3 seconds and the driver’s eyes leave the road multiple times.

Among the popular features built into Sync are getting traffic information and 911 assist. Ford’s cars also have high-tech features such as blind-spot information system, cross-traffic warnings, and active park assist to make it easy to parallel park. 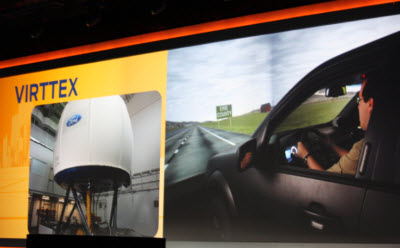 The good thing about Sync is it is a software platform that can be continually improved. The idea is to keep the car company moving at Silicon Valley speed, Mulally said.

The company is racing ahead with a new improved version of Sync and other dashboard changes. The new cars will have thumb wheel controls on the steering wheel and colorful LCD displays for its dashboards, dubbed myFord touch, with new touchscreen technologies and no mechanical knobs. The new Ford Edge will have myFord Touch this year, and 80 percent of models will have it in the next five years. The cars will have music jacks, universal serial bus ports, SD memory cards slots and other ways to connection electronics.

You can use the big eight-inch touchscreen to control your phone, or use your voice to do so. You can also use it to navigate, get travel data such as nearby fuel stations, check traffic or view vehicle maintenance information. Ford has its own appstore to add new apps to the Sync service. That’s how you can add apps such as Pandora, Stitcher or Twitter.

You will be able to beam in content via the Ford Service Delivery Network, with data downloads including things like Mapquest maps, local directories, sports scores and traffic information. With Mapquest, you can find directions on a computer and then send them to your car wirelessly via Sync. This “send to Sync” feature is pretty cool.

You can also use a song “tagging” feature to identify songs that you hear on the radio, and you can use Sync to record satellite radio shows and play them back when you want them. You can also send text message replies by voice, choosing from among 15 different pre-created responses.