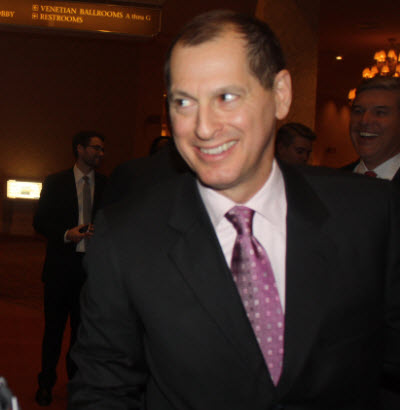 Gary Shapiro, chief executive of the Consumer Electronics Association, said tonight that the tech industry’s biggest trade show in North America has grown its attendance in spite of the ongoing economic uncertainty.

At a leadership dinner at the Consumer Electronics Show, Shapiro (right) said that attendance figures so far in the show, which ends on Sunday, have hit 112,000. At this time last year, there were only 92,000 attendees. The numbers are preliminary and are not yet audited. Last year’s final audited number was 113,000, down from 141,150 the year before. This year, the attendance figures suggest CES will beat last year’s number by a healthy margin. Shapiro was actually expecting a decline in attendance when I talked to him in December, though he said anything was possible.

Shapiro said that this year’s show seemed far more upbeat than a year ago, reflecting a return to optimism for the industry. There were fewer exhibitors this year: 2,500 compared to 2,700 last year. But Shapiro has repeatedly pointed out that there are 330 new exhibitors this year, a huge bump that reflects some of the growth of startups and the churn in the industry caused by economic turmoil.